James Grundy, an 87-year-old British veteran of the Korean War, will share his experiences of serving in a recovery unit during the war at Nam District Office in Busan on Wednesday.

“My talk will mainly be about the losses of life during the Korean War, but I will also be talking about the civilian loss,” Grundy told the Korea JoongAng Daily in an email. 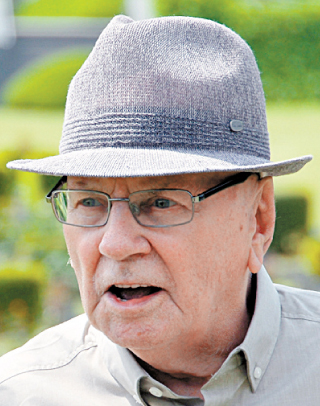 Grundy helped recover the bodies of around 90 soldiers from Britain, the United States and South Korea between February 1951 and June 1953. “My work with the recovery team was as you can envisage,” he said. “Horrible as the work we did was, I knew that my duty was to give fallen soldiers a decent burial. There were difficulties, such as in finding bodies that had been tampered with - such as dog tags switched from one body to another - so we could not identify them. They are at rest at the Unmck [United Nations Memorial Cemetery in Korea] as unknown soldiers.”

He has been coming back to Korea every year for the past 30 years to visit the Unmck since he was invited by the Korean Ministry of Patriots and Veterans Affairs in 1988. “I return every year to visit my fallen comrades and to wonder at the beautiful surroundings they rest in,” he said.

The cemetery holds a total of 2,297 soldiers, including 884 from Britain, 462 from Turkey, 378 from Canada, 281 from Australia and 117 from the Netherlands. The U.S. soldiers were all sent back home as per an agreement at the time, but 36 asked to be buried at the Unmck in their wills and are buried at the cemetery.

The district office will present Grundy with honorary citizenship from Nam District during his visit for his continued assistance in taking care of the graves of fallen soldiers at the Unmck “Mr. Grundy is the second foreigner ever to receive this citizenship of Nam District, after we presented it to Anton Trauner, a German priest who dedicated 50 years of his life to the livelihood and welfare of the residents of Nam District,” the district office said in a statement.

Though Grundy has witnessed the country change throughout the years, there are some things in Korea that always stay the same, he said. “The one thing that never changes are the Korean people themselves,” he said. “When I first came to Korea, the people were always smiling - it was a notable thing that told me the people of Korea could smile through such a terrible war.”

Grundy is currently fighting cancer and said that he hopes to be buried at the cemetery in the future as well.

“The management body of the Unmck, which is made up of members from 11 countries, has approved this request,” said Park Eun-jung, an official of the Unmck.