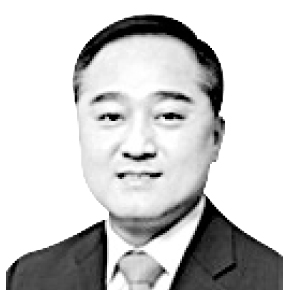 Chung Chul
The author is the vice president of the Korea Institute for International Economic Policy.

The Korean economy faces headwinds both at home and abroad. Organizations have all downgraded forecasts for the global economy this year. The Bank of Korea, the International Monetary Fund (IMF) and the Organization for Economic Cooperation and Development (OECD) all predict the Korean economy will grow 2.6 percent in 2019, further slowing from last year’s estimated 2.7 percent. The Asian Development Bank and the National Assembly Budget Office give a more pessimistic number of 2.5 percent, and Standard & Poor’s places it at 2.4 percent.

IMF Managing Director Christine Lagarde in February singled out “four clouds” — the possibility of a no-deal Brexit, competitive tariff escalation from trade tensions, global financial tightening and an accelerated slowdown in the Chinese economy — as factors deepening uncertainties for the global economy. Yet she refrained from raising the likelihood of a perfect storm. In other words, she did not go so far as to warn about a worst-case scenario for the world economy.

Yet the precarious developments on the global front land harder on the export-reliant Korean economy. Semiconductors and petrochemicals that supported our exports have turned negative, boding badly for the economy. The factory-operation rate stalled at 71.2 percent in February. The operation rate for semiconductor production lines has hit the lowest levels in 43 months. In the meantime, factory utilization rates in other developed economies have been rising. 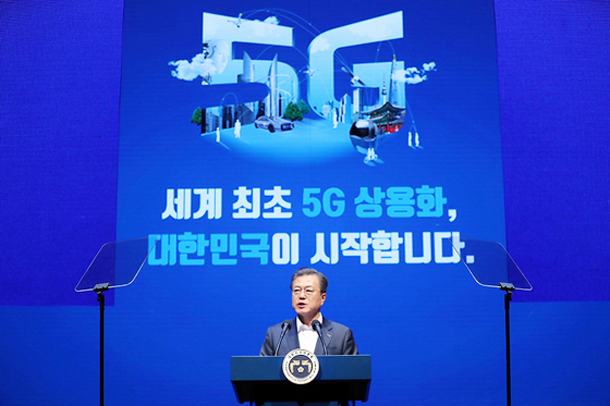 President Moon Jae-in makes a speech at an event to celebrate the world’s first commercialization of the 5G telecommunication in Korea on Monday. [BLUE HOUSE]

It is important to study whether the ongoing challenges are simply temporary or structural to come up with adequate measures. The global economy eventually recovered after being shaken by a financial crisis 10 years ago. Yet since 2015, global trade has been slowing, raising concerns about structural changes. In the past, global trade could increase thanks to the expansion in the value chain across the world. But trade protectionism from conflicts between the two largest economies, the United States and China — and the ascent of nationalism in the European bloc through the momentum of a Brexit — have dampened growth in the global value chain and trade.

Thanks to the advances in transportation and telecommunications, the global value chain has allowed factories to move to markets offering cheaper labor cost. Reduced costs and technological progress helped increase supply but also led to oversupply despite decreasing purchasing power. Jobs and incomes can increase in areas with enhanced industrial activities, but the places that lost factories suffered a reduction of jobs and income, which could force demand to plunge across the globe.

To find a breakthrough for the Korean economy in the mid- and long-term, the structural changes in global trade and the global economy must be understood. Protectionist trade policies of the United States, the Sino-U.S. trade war, slowdown in the Chinese economy, and the unpredictable developments in the European economy following Brexit all spell reduced demand for Korean products.

The government also must take into account the fact that exports have less of an effect on the economy. Its trade policy should focus on creating higher value in the domestic economy rather than focusing on the total exports. To expand domestic demand, jobs and purchasing power should be bolstered. This is only possible when investment increases at home. The government must create an environment more appealing to domestic and foreign companies than before.

Korea’s standing in the new digital and automation age remains questionable. Regulations and policies defending traditional mainstream industries hamper innovative ideas. They should be removed to make way for investments for new growth. More eager spirit and wisdom is needed to weather the daunting challenges in the era of the fourth industrial revolution.
Translation by the Korea JoongAng Daily staff.