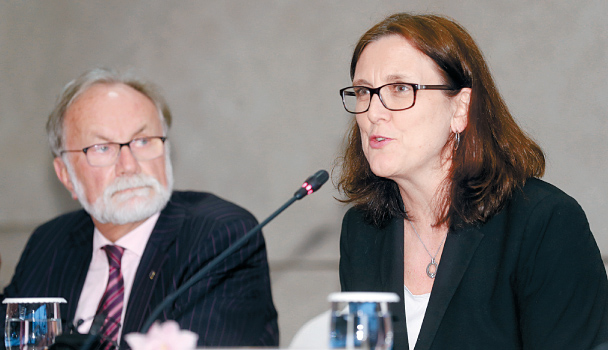 Malmström said Korea is not keeping its promise to ratify ILO conventions as part of its Free Trade Agreement (FTA) with the European Union (EU).

Despite joining the ILO in 1991, Korea has deferred four of the organization’s eight fundamental labor conventions, such as the freedom of association. While the Moon Jae-in administration decided to tackle the issue in 2017, a joint dialogue panel of business and labor representatives has so far failed to reach an agreement.

“We and the ILO are concerned that the conventions are not ratified and that the laws are not in compliance,” said Malmström on Tuesday at a press conference following discussions with her counterpart, Minister for Trade Yoo Myung-hee, at Lotte Hotel Seoul, central Seoul. “We have not set a deadline […] but we need to see some quick progress.”

While declining to explain the specifics of the conventions, the trade commissioner said that the dispute could escalate by being referred to the WTO or a council of experts for a punitive resolution, adding that Korea’s credibility is of primary concern.

“This is about the credibility of an OECD country, a member of the ILO, to live up to international conventions that it has contributed to develop,” explained Malmström.

According to the Ministry of Employment and Labor, Malmström said launching an expert panel could be inevitable if Korea does not make progress in its efforts to ratify the conventions at an earlier meeting that day with the labor minister.

While not specifying the progress of talks with Korean officials on Tuesday, Malmström told reporters she will continue dialogue with lawmakers.

Ratifying the conventions has created fierce debate between businesses and labor in Korea.

To offset the possible ramifications of ratifying the conventions, Korean businesses have argued they should be allowed to implement job sharing, lengthen agreements between companies and their labor unions from two years to four years and restrict striking workers from occupying company offices. The unions have rejected the proposals.

The Korean Confederation of Trade Unions and the Lawyers for a Democratic Society, among other groups, released a joint statement earlier Tuesday criticizing the stalled efforts to ratify the conventions.

“[This administration] is no different from previous administrations that repeated excuses that a swift ratification is difficult,” read the statement. “The government should immediately ratify the fundamental ILO conventions without conditions.”

The commissioner addressed other concerns, such as Korea’s treatment of EU beef exports and European businesses in the country.

“A vast majority say the business climate has become worse in the last year, more unpredictable, less transparent,” said Malmström, citing a survey by the European Chamber of Commerce in Korea on European businesses. “I have conveyed this to the minister.”

Despite the concerns, Malmström highly rated the trade deal.

“Trade between us has been a success,” said Malmström “Trade in goods is worth over 1 billion euros ($1.13 billion) every year and has gone up 48 percent compared to 2010, just before [the deal] was enforced.”