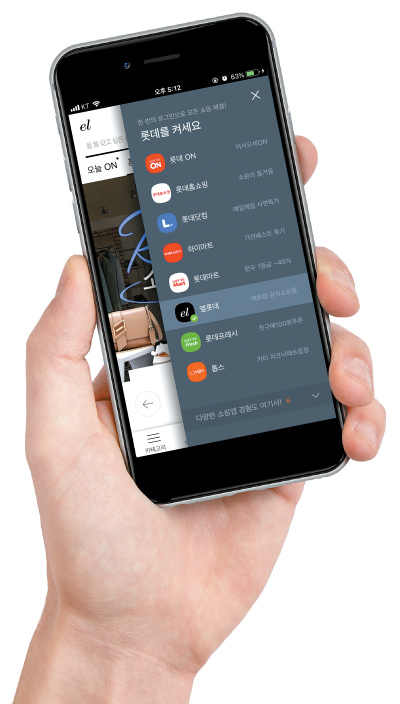 The gradual increase of single-person households and the shift toward online shopping has been threatening Korea’s large discount chains for years, but last year’s sales performance of the three major players - Emart, Homeplus and Lotte Mart - suggests things took a dramatic turn for the worse in 2018.

Emart, Korea’s largest discount chain, saw its operating profit fall 26.4 percent on year last year, while Lotte Mart saw its own nosedive 79 percent. Homeplus hasn’t released its numbers yet, but its 2017 report shows that it saw a 23-percent on-year dip that year.

The devastating results have forced the chains to strengthen their online businesses, intensifying the cutthroat competition in the e-commerce market.

Though Coupang is currently at the forefront of the e-commerce market in Korea, industry insiders say there’s still a chance for the discount retailers as there isn’t yet a single dominant player with a market share higher than 10 percent, according to a report from Eugene Investment. 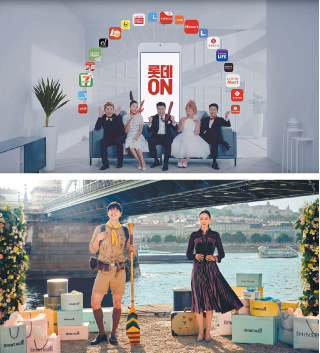 To become Korea’s answer to Amazon, Emart and Lotte Mart have been investing heavily in their online businesses.

In December, Shinsegae Group spun off its online businesses - Emart Mall and Shinsegae Mall - from Emart and Shinsegae. The board of directors in January voted to merge the two new entities, which resulted in the launch of the group’s brand new e-commerce brand, SSG.com.

“Shinsegae department stores and Emart were the driving forces that led to the growth of Shinsegae Group,” said Shinsegae Vice President Chung Yong-jin last year. “But from now on, the newly-established online entity will be the main driving force. We will pay full attention to foster the entity to become [the group’s] prime retail channel that surpasses [the performance of] the department store and Emart.”

As part of the plan to achieve the ambitious goal, SSG.com is establishing an additional distribution center in Gimpo, Gyeonggi, in an effort to raise delivery efficiency. It will be the third distribution center catering to online orders and will open in the second half of this year.

In August, Lotte launched an e-commerce business division that takes care of the group’s integrated online businesses. As part of the effort, Lotte, on April 1, released the new Lotte On mobile app that integrates the sales of its seven retail businesses, including Lotte Mart. By logging into the app, users can buy products from Lotte Group affiliates, including Lotte Department Store and Lotte Hi-Mart.

Lotte merged its two logistics affiliates - Lotte Global Logistics and Lotte Logistics - in November and opened a distribution center named Auto Fresh in Uiwang, Gyeonggi, in March. Both moves are part of the group’s efforts to beef up delivery efficiency.

The first of its kind, Auto Fresh was built to handle online orders of fresh produce - one area where discount marts may have a competitive advantage over e-commerce operators thanks to their established food-supply chains. 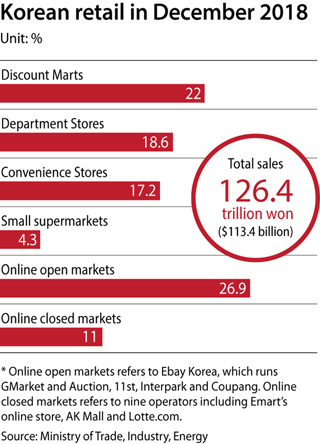 Rapidly changing purchasing patterns show that discount chains had no choice but to beef up their e-commerce businesses.

According to data from Statistics Korea, the total number of online transactions grew more than 20 percent to 111.9 trillion won ($100.4 billion) last year. This is most evident in the double-digit growth of e-commerce operators like Coupang.

In order to catch up with established e-commerce firms like Coupang, discount chains have been heavily investing in distribution networks.

Though rapid delivery isn’t exactly revolutionary - as seen by Coupang’s overnight delivery and Market Kurly’s delivery of fresh produce by dawn - efficient management of delivery is the key that could determine the winner in the e-commerce market, according to analyst Ju Yeong-hun from Eugene Investment & Securities.

Discount chains should have an advantage when it comes to efficient delivery because of their capital strength and offline stores.

“Discount marts have benefits over e-commerce retailers because of their stores nationwide,” said Ju. “Coupang, for example, needs to build a delivery network from scratch because it doesn’t have any offline stores, meaning that the initial cost is very high. Discount marts can initially use their stores as distribution centers and gradually build more as needed to raise the delivery efficiency.”

Lotte Mart is trying to do exactly that: Moving a step forward from Emart and Homeplus, Lotte announced it will deliver online orders in just 30 minutes. When a customer places an order, products from the closest store will be delivered by motorbike, just like orders placed through a food delivery app.

Despite the advantages, the entire game could change if e-commerce operators continue to receive large investments, Ju said, mentioning the 2 trillion won Coupang secured from SoftBank’s Vision Fund in November.

“The key strategies for discount stores [to succeed in the online market] will be building an efficient delivery system, expanding the range of products online and complementing the issue of its inability to elastically set prices online due to [the price offered at] offline stores,” said Lee.

Going beyond the internet

Apart from the online business, discount chains could improve sales by being quicker to adapt to Korea’s rapidly changing society.

According to Prof. Seo Yong-gu, who teaches business at Sookmyung Women’s University, discount chains’ product ranges are still catered toward a four-person household.

“They need to realize that such a way of selling no longer works in a society where single-person households continue to grow while the number of people getting married declines,” said Seo.

As of 2017, 28.6 percent of households in Korea are single-person households, a rapid growth from 9 percent in 1990. The marriage rate last year dropped 2.6 percent on year to stand at just 257,000, the lowest figure since Statistics Korea began compiling data in 1970.

Offering own-brand products has proven to be one way for discount chains to successfully differentiate themselves.

Emart’s No Brand line, introduced in 2015, aims to offer quality products at lower prices by cutting down advertising and design costs. The brand started off with nine products, but now has more than 1,000. No Brand sold 23.4 billion won in sales in its first year. The figure shot up to nearly 290 billion won in 2017.