‘School of Rock’ is ready to kick off a world tour in Seoul: Musical version of the 2003 film promises to rock audiences of all ages

‘School of Rock’ is ready to kick off a world tour in Seoul: Musical version of the 2003 film promises to rock audiences of all ages 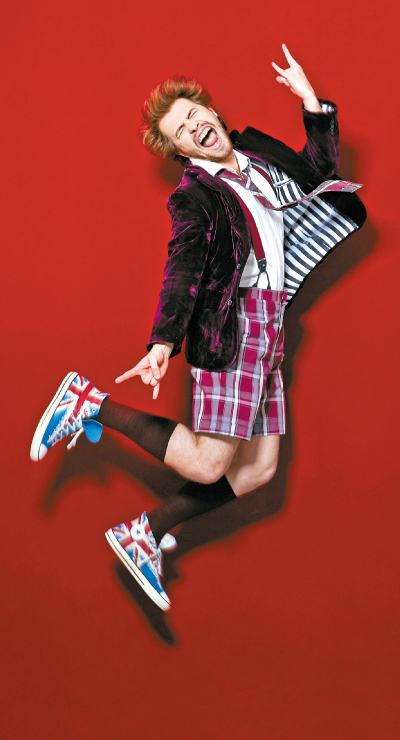 Conner Gillooly, who will be playing Dewey Finn in the musical “School of Rock,” visits Seoul to promote the world tour production of the show that starts in Seoul on June 8. Gillooly has been playing Dewey on Broadway since 2017. [S&CO]

The spirit of rock ’n’ roll swept the country late last year when the “Bohemian Rhapsody” craze made many Koreans return to the albums of the British rock band Queen. Those who want to keep rockin’ out have something to look forward to this summer when Andrew Lloyd Webber’s Broadway musical “School of Rock,” based on the 2003 film of the same name, will kick off its first world tour in Korea.

The musical premiered on Broadway in 2015 with music by Webber and lyrics by Glenn Slater. According to organizers, the show has been performed in other parts of the world, but this particular production, co-produced by Korea’s S&Co and GWB Entertainment, will be the first to actually tour around the world. After its run in Korea, the show plans to make stops in Australia, New Zealand and Europe as well as other countries in Asia.

“We’ve been lucky enough to share this particular show all around the world and we couldn’t be happier to finally be here in Korea,” said Patrick O’Neill, assistant director and associate choreographer, at a press conference on Monday at the Westin Chosun Hotel in central Seoul. “What we are so excited about is to introduce you to Conner Gillooly, who will be playing the lead role Dewey Finn, and the fabulous group of young musicians who are just going to blow the roof off of the theater.”

O’Neill introduces the show as a thrilling story about “becoming one’s true self, about music and about how you can find who you are and who you want to be through the gifts that you have been given and through the support that is nurtured by parents, by teachers.”

O’Neill says the difference between the film and the musical will be “very slight.”

“What we wanted to do was create a story where young [students] and their parents and Dewey’s journey all have equal importance,” he said. “So at the end of the evening, you leave the theater feeling as if everyone has been made a better human being. The biggest difference is that there’s a love story involved in our stage play that is not in the movie. How can you have an Andrew Lloyd Webber show without a beautiful love song? So we’ve incorporated that. Rosalie, the principal of the school, sings in the show, too. It’s about love of music, about love of life and ultimately about wanting to find real love.” 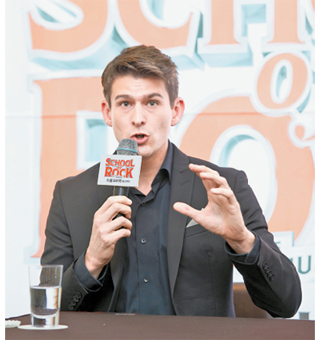 The charm of the show, what film can’t provide, according to O’Neill, is, of course, the music written by Webber.

“What’s funny is people forget that Andrew wrote ‘Jesus Christ Superstar’ and he also wrote a beautiful piece called ‘Song and Dance’ from the 1980s,” said O’Neill. “He’s the father of theatrical rock music. Since then, we’ve had ‘Phantom of the Opera,’ and ‘Cats.’ He’s turned into a very eclectic, symphonic composer. So what’s so special about ‘School of Rock’ is you get all of that. You have beautiful Andrew Lloyd Webber melodies, and you have fantastic rock music. You have a little taste of everything that he’s so good at.”

On top of that, there is the character Dewey Finn who was first played by Jack Black. Dewey becomes a substitute teacher after getting kicked out from his rock band. He leads a group of prep school students to discover their musical talent and form their own band. Black’s acting in the original film made a huge impression and the producers behind the show know that he is irreplaceable.

For Gillooly, who also visited Seoul to promote the world tour, playing the character was, of course, a challenge.

“I was honored when they discussed the part with me - they wanted me to put my own fingerprint on it just as Jack Black did in the movie,” Gillooly continued. “They gave me freedom to add jokes [and] add more physical comedy, which is something that I’m more prone to. I’m bit of Bugs Bunny in that sense. The process was a bit more open and free and allowed all of the actors, young and old to connect in that sense.”

At left is a scene from the Broadway production of “School of Rock.” The world tour production of the musical kicks off in Seoul on June 8. At right is the poster for the show in Seoul that will be staged at the Charlotte Theater in Jamsil-dong, southern Seoul. [S&CO]

The role of Dewey is actually Gillooly’s first professional role as an actor. But as an entertainer who loves rock music and comedy, as well as singing, acting and writing, Gillooly says this role helps him “stretch all those muscles.”

Growing up, Gillooly says his parents really drilled rock music into his head.

“There’s one rock group that they specifically drilled, and that is my favorite band by far. It’s Queen,” he said. “To me you have all aspects of great rock group - the bass, the drum, the epic guitar and, of course, Freddie’s legendary vocals. Freddie taught me that it’s more than being a vocalist, you are an entertainer.”

Gillooly is also a writer, and his thirst for writing gets quenched while playing Dewey.

“Writing helps me find my own voice. It helps me find things I’m naturally drawn to, things that I just find funny,” he said. “When I got this role and they told me to use [my] own voice to feed the role, it couldn’t have been more perfect. As a writer, [I] get to add lines and improve a bit. As a singer, I get to perform some of the most wonderful music from the most wonderful composer.”

Since this is a world tour, O’Neill says there will be something special for each country.

“Because the show is so specific, we are able to search for and find actors - young actors and adult actors who we love - who are fearless, who we can use the structure of our play but add new things along the way,” he said. “So each company is a little different. So you’ll be getting something special here in Seoul.”

O’Neill, who has been involved in the musical since the beginning, says he is certain that this musical will not disappoint fans of the “School of Rock” movie nor fans of Jack Black.

“I’ve been lucky enough to be around the show since the beginning. And it didn’t look like this when it started,” he said. “It was very small. We worked in a small theater in downtown New York. We had little cubes, black wooden cubes that were school desks, tables and fake drum kits. We invited an audience. And when you do something new, you hope it speaks to people. You hope that it makes an impact. But you never know. So we had an audience see the small version and when it was over, there was silence, for about 10 seconds. And then there was the most riotous applause I ever heard in my life. That was exciting because the story was good [and] the talent was good.”

“School of Rock” will kick off at Charlotte Theater in southern Seoul on June 8 and run until Aug. 25. It will then head to Busan and Daegu before touring to other countries. Tickets range from 60,000 won ($52) to 160,000 won. The shows will start at 8 p.m. on weekdays and at 2 p.m. and 7 p.m. on weekends and public holidays. There will be no shows on Mondays. For more information, visit kr.schoolofrockthemusical.com or call 1577-3363.