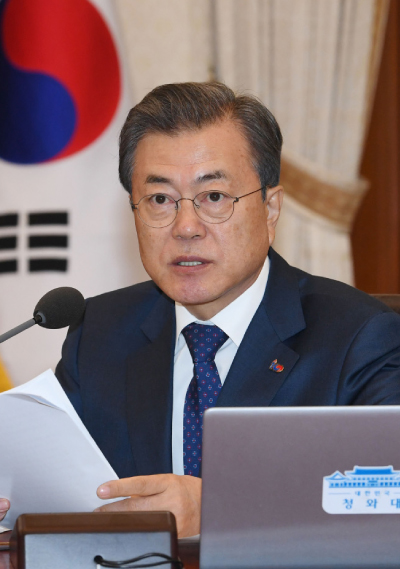 President Moon Jae-in will depart for Washington today for a summit with U.S. President Donald Trump that is aimed at reviving denuclearization negotiations between the United States and North Korea.

“The upcoming summit is taking place based on the mutual understanding that consultations between Korea and the United States are crucial to revive the momentum of dialogue after the North-U.S. summit in Hanoi, [Vietnam]” said Kim Hyun-chong, the second deputy chief of the Blue House’s National Security Office. “The president’s upcoming visit will be an opportunity to continue the top-down approach while seeking a specific plan for the complete denuclearization and permanent peace of the Korean Peninsula.”

Moon will leave Seoul in the afternoon and arrive at Washington on the same day. On Thursday, Moon will have a series of meetings with key U.S. officials handling the North Korea issues. He will sit down with Secretary of State Mike Pompeo, National Security Adviser John Bolton and Vice President Mike Pence in separate meetings. Moon’s summit schedule will begin at noon. For two hours, Moon will have a summit with Trump and an expanded meeting accompanied by key aides from the two countries. A working luncheon will follow, Kim said.

The summit, the seventh of its kind, will be the first meeting between Korean and U.S. leaders since Trump’s second summit with North Korean leader Kim Jong-un broke down in Hanoi in February. A senior Blue House official said Tuesday that the summit in Hanoi was not a failure.

“It was a good opportunity that allowed us to find out what the needs of each concerned countries are and which direction we must go in the negotiations,” he said.

He also stressed Moon’s role as an arbiter.

Moon was briefed by Trump on the results of the Hanoi summit over the telephone almost immediately after the U.S. president departed for Washington on Air Force One.

According to sources from the National Assembly last month, Chairman Lee Hae-chan of the ruling Democratic Party told political leaders that Trump asked Moon to play a role as a mediator between him and Kim.

“During the phone call, Trump repeatedly asked Moon to meet with and talk to Kim and let him know about their talks,” Lee was quoted as saying. Trump requested that Moon help mediate seven times during the 25-minute phone call, Lee said. It remains to be seen whether Moon is taking a specific message from Kim to Trump. Until now, no special contact between the two Koreas was reported. The government has said it will make public any dispatch of a special envoy to the North, but no announcement was made.

When asked whether Moon will continue to pitch a phased compensation deal based on the comprehensive denuclearization agreement at the upcoming summit, the Blue House official said Tuesday that “the two leaders will discuss it.”

To bring back the North to the negotiation table, the two leaders are expected to discuss the so-called “early harvest” plan. An “early harvest” refers to a partial lifting of sanctions in return for the North’s partial denuclearization, such as shutdown of the Yongbyon nuclear facility. Resumption of Kaesong Industrial Complex or Mount Kumgang tour program was also discussed as possible compensation.

Last week, Lee Do-hoon, Seoul’s top nuclear envoy, stressed the importance of an “early harvest” plan. He said when the dialogue resumes, it is important to swiftly produce outcomes, whether they are large or small. On Tuesday, a Blue House official dismissed talk that there is disagreement between Seoul and Washington on the denuclearization deal. “The two countries are in agreement on the end state, the final stage of complete denuclearization,” he said. “And the two sides also agree on the need for a roadmap to accomplish a complete denuclearization - so the two leaders will discuss the process this time.”

The official, however, refused to discuss the specific steps to be discussed between the two leaders.

“We will stress the importance of maintaining the momentum of the dialogue,” he said. “The top-down approach must be maintained and the framework of the sanctions must also be kept.”