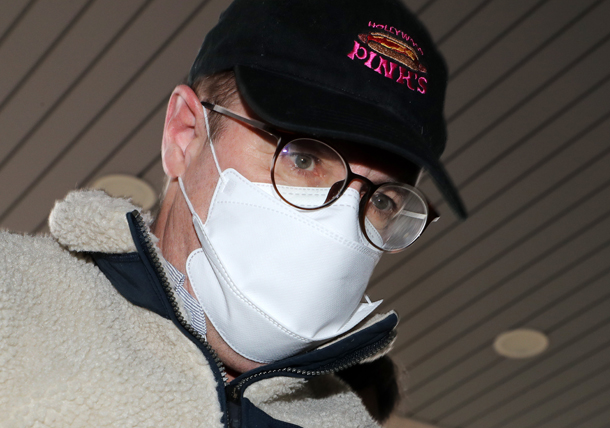 Holley, who also goes by the Korean name Ha Il, partly admitted the charges, saying he administered the substance alone in his home in western Seoul earlier this month, police say. A urine test conducted on Tuesday showed traces of methamphetamine in his system, according to police.

Police were investigating a drug dealer operating via the internet and obtained evidence that Holley had sent several hundred thousand won in a wire transfer to the dealer for an unknown amount of drugs sometime in mid-March.

After getting a warrant for Holley’s arrest from a local court, police took him into custody in a parking lot at his home around 4:10 p.m. on Monday. In a search of the residence, investigators apparently found a syringe that may have been used to take the drug.

Holley was kept overnight in a cell at a local police precinct in western Seoul before being transferred to Gyeonggi Nambu Provincial Police Agency headquarters in Suwon on Tuesday. Donning a cap and mask, he replied to reporters who swarmed him during the transfer that he “apologizes with a heavy heart.”

Police are set to further question Holley on the circumstances of his drug consumption as well as the involvement of possible other accomplices. A second urine sample and a hair sample were sent to the National Forensic Service for testing.

He is portrayed on TV as a family man with a close relationship with his Korean wife and children. When his youngest son deleted Holley’s social media account after news of his arrest broke Monday, some disbelieving internet users speculated that Holley may have taken the blame for what could have been drug use by his son.

Holley’s wife, Myeong Hyun-sook, denied the rumor in an interview with a media outlet on Tuesday, adding that she, too, was uncertain about the current state of affairs involving her husband.

A native of California, Holley first came to Korea as a missionary for the Church of Latter-Day Saints (LDS), more commonly known as the Mormons, in 1978, then returned in 1982 to study at Yonsei University. He later began a legal career in Korea, founding the Gwangju Foreign School in 1996, where all three of his sons were educated. The following year, he became a naturalized Korean citizen.

Holley also recently flirted with a political career, attempting to get a nomination from the then-ruling Saenuri Party, the forerunner of the conservative Liberty Korea Party, for a proportional representative seat in the 2016 parliamentary elections - owing to what he personally claimed was a conservative upbringing in a family of Republicans in the United States.

Holley’s Mormon faith is attracting much comment, since Mormons are strictly forbidden to indulge in stimulants like alcohol and caffeine, let alone illegal drugs like meth.

Mark Peterson, one of Holley’s closest friends and former president of the LDS’s mission in Busan, added to the controversy by telling Yonhap News Agency Tuesday that Holley had been framed by the police for drugs six months ago.

Peterson, who is a professor emeritus at Brigham Young University in Utah, claimed Holley’s name had come up when police had questioned another well-known celebrity, whose name Peterson said he did not remember, for drug suspicions in October or November, offering him a plea bargain if he named names. He allegedly named Holley.

At the time, according to Peterson, Holley told him he was having a hard time as he had been treated harshly by the police, who allegedly assumed he was guilty and tried to force an admission from him. Peterson further claimed the police may have reopened an investigation into Holley recently at the behest of higher officials who wanted to nab another high profile figure amid a major celebrity drug scandal. Police denied Peterson’s claims of a targeted investigation against Holley Tuesday afternoon in a text message sent to reporters, saying they had discovered his involvement in a drug transaction while conducting a major probe into online distribution of illegal narcotics since last month. Holley was captured on surveillance footage transferring money to an account linked to a suspected dealer through an ATM machine in Gangnam District, police said.