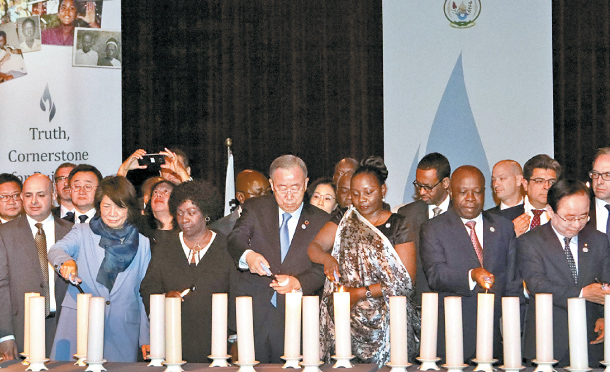 The Embassy of Rwanda, Rwandan residents of Korea, former UN Secretary General Ban Ki-moon and Korea’s diplomatic corps solemnly marked 25 years since the 1994 genocide of the Tutsi in Rwanda on Monday, vowing to never again stand by as an atrocity against mankind is committed.

“Today is a special occasion as we are marking the 25th commemoration of the 1994 genocide against the Tutsi in Rwanda,” said Ambassador of Rwanda to Korea Emma-Francoise Isumbingabo to the around 100 Rwandans, ambassadors and audience members gathered at the auditorium of Far East Broadcasting Company in western Seoul on Monday. “Every year from 7 to 13 of April, Rwandans observe Kwibuka to pay homage to the victims of those dark days, an important occasion to remember the lives lost, show solidarity with survivors and reflect on Rwanda’s transformational journey.”

Twenty-five candles were lit at the ceremony in Seoul following the commencement of a week-long mourning and remembrance of victims that began in Kigali, Rwanda, on Sunday. Rwandan President Paul Kagame laid a wreath at Kigali Genocide Memorial. The president, officials and some 2,000 people took a walk from Rwanda’s parliament to the Amahoro Stadium to remember those lost.

The genocide is generally considered to have been sparked by the sudden death of Rwandan President Juvenal Habyarimana, a member of the Hutu ethnic group, when his plane was shot down on April 6, 1994. No party has yet taken credit for the attack.

“We must never forget the 1994 genocide against the Tutsi in Rwanda that was perpetrated by evil men with wrong, biased and unfounded ideologies, whose hatred led to the loss of more than a million innocent lives,” said Ambassador Isumbingabo. “Kwibuka is indeed an opportunity to galvanize all efforts at national, regional, continental and international levels against genocide ideology and collectively fight against all forms and manifestations of genocide denial.”