Thousands of lawyers are coming, and he’s host

Thousands of lawyers are coming, and he’s host 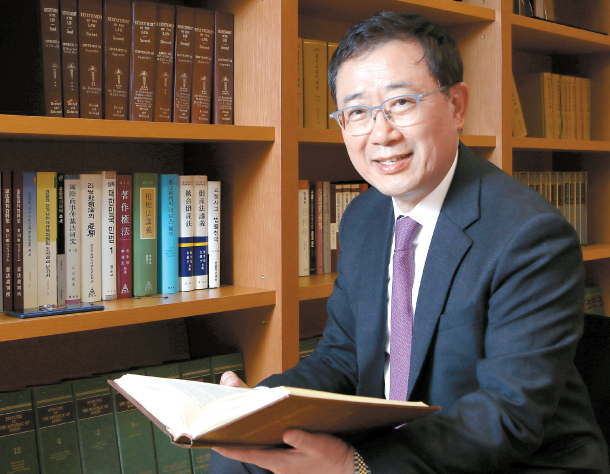 Choi Chung-hwan, a partner at the Korean law firm Lee & Ko and chair for the organizing committee for this year’s International Bar Association annual conference, says he looks forward to improving the reputation of Korean lawyers through the upcoming meeting slated for Sept. 22 through 27 at Coex in Gangnam District, southern Seoul. [PARK SANG-MOON]

Choi Chung-hwan, a partner in the Korean law firm Lee & Ko, will never forget the first time he attended a major meeting of the International Bar Association (IBA), the most prestigious organization of international lawyers. In 2009, Choi, as a representative of the Korean Bar Association, flew to Paris to participate in an IBA council meeting.

“I was daunted,” he recalled. “People from 190 bar associations all over the world were gathered and the IBA president was standing on this high podium as if it was some sort of a United Nations General Assembly.”

But it’s the IBA’s annual conference that garners the most attention, gathering thousands of lawyers from all over the world. Members of the Korean Bar Association started actively attending that annual conference in 2007. Choi thinks it’s amazing that Seoul has been chosen to host this year’s IBA conference.

From Sept. 22 through 27, between 6,000 and 8,000 lawyers from 130 different countries are expected to visit Coex in Gangnam District, southern Seoul, to exchange knowledge on a wide variety of topics from human rights, the rule of law, the challenges of law firm management and the future of the legal profession. Among those participants, Choi believes two-thirds will be visiting Korea for the first time and over half will probably bring their families along.

From 2015 to 2018, Choi served as a member of the IBA’s Management Board when the board selected Seoul to host this year’s conference. Today, he’s chair of the organizing committee for the Seoul meeting.

The Korea JoongAng Daily sat down with Choi on April 3 at Lee & Ko’s office in Jung District, central Seoul, to hear how preparations for the IBA conference are coming along. The following are excerpts of the interview, which were edited and condensed for clarity.

Q. On a scale of 1 to 10, how prepared are you for the IBA annual conference?

A. About 4. We opened the registration website and the main programs have all been set up. We just need to work on the details now, like deciding on the speakers and some smaller topics and programs.

Speaking of speakers, who will give the keynote speech?

We invited President Moon Jae-in, who used to be a lawyer. But he’s a very busy person and the conference is months away, so we’ll have to wait to definitely know whether he’d be available then. We also considered former UN Secretary General Ban Ki-moon, but he said he was planning to attend the UN General Assembly at the time the IBA conference is going to be held. Another person we have in mind is Song Sang-hyun, the first Korean to serve as president of the International Criminal Court. We hope one of the three gives the keynote speech.

Out of more than 200 sessions planned for the conference, one will be about North Korea’s crimes against humanity and another will be on investing in North Korea. Are those two subjects often raised in IBA annual conferences?

What topics about South Korea are international lawyers interested in?

Going back to North Korea, I heard the IBA Management Board, which decided in 2015 to host the 2019 conference in Seoul, almost changed its mind after threats from Pyongyang in 2018.

Foreigners in general are very concerned about North Korea. With the IBA annual conference, it was tricky because a lot of the IBA’s yearly revenue is derived from its annual conferences and the IBA was afraid lawyers wouldn’t show up because of North Korea. Then there was the issue of safety and who’d be responsible if participating lawyers came to harm.

In February 2018, there was a board meeting in Prague [the capital of the Czech Republic], and by the time I got there, the IBA’s Risk Management Committee had issued a report saying that if the IBA goes ahead with hosting the 2019 annual conference in Seoul, it could risk more than ￡8 million (about $10.5 million). So the majority of the Management Board said the 2019 conference shouldn’t be held in South Korea. On my part, I tried to convince the members that it would be okay to host the conference in Seoul and that preparations were already underway.

He roughly said, “We’re a group of lawyers, and the main principle of a lawyers’ group is the rule of law. The principle of the rule of law is keeping promises. Deciding not to host the annual conference in South Korea, after telling South Korean lawyers that the conference will be held there, goes against our spirit … There’s always a risk. If a nuclear war erupts in South Korea, no matter where the conference is held, no one would want to come anyway. Would you go abroad and leave your family behind during a nuclear war? There’s a risk everywhere. The IBA annual conference will be held in Miami next year, and there could be a hurricane there, too.”

The atmosphere suddenly changed. Some members still rejected holding the conference in Seoul, but in the end, the Management Board decided to hold the 2019 event in South Korea.

What are your expectations for the upcoming conference? How would it affect South Korea?

The event will definitely have a huge impact on the domestic tourism industry, but as we prepare for the conference, I feel quite sad about several things. The only conference center sizable enough to hold participating lawyers in Seoul is Coex, but the place is surrounded by modern buildings so it’s hard to show a traditional side of Korea. There are some traditional places to show off in the northern part of the Han River, but not in Gangnam. International lawyers are really interested in K-pop, so the organizing committee is thinking about inviting K-pop stars to hold a show for us, or perhaps invite taekwondo athletes to throw a cool demonstration.

We expect two-thirds of the visiting lawyers to have never been to Korea, and they’re all really famous lawyers from their respective countries, so the key goal of our organizing committee is to offer a really strong first impression of Korea.

South Korea is the 11th largest economy in the world, but a lot of people are unaware of that. By inviting them to Seoul, I want to prove that Korea is a clean, developed country with infrastructure befitting an economically strong nation.

The larger goal is to show how competent Korean lawyers are. Korean lawyers are really intelligent, in large part because the exam they must pass to become a lawyer is really difficult compared to that of other countries. But a lot of Korean lawyers work only on domestic cases. They barely go abroad.

The biggest reason is the language barrier. In the past, Korean lawyers didn’t need to work in a foreign country because they had enough work to do in Korea. But that’s not the case anymore. It’s especially hard for young lawyers to build a promising future here because the local law industry is overcrowded.

It’s been 10 years since you first attended a major IBA meeting. How has the IBA impacted you and your legal career?

I’ve gained confidence. I was really intimidated when I attended my first IBA conference, but now, I’ve realized Korean lawyers don’t have to be afraid and that they, too, can become leaders of an international lawyers’ organization.