SK’s Moon is the best pitcher without a win

SK’s Moon is the best pitcher without a win 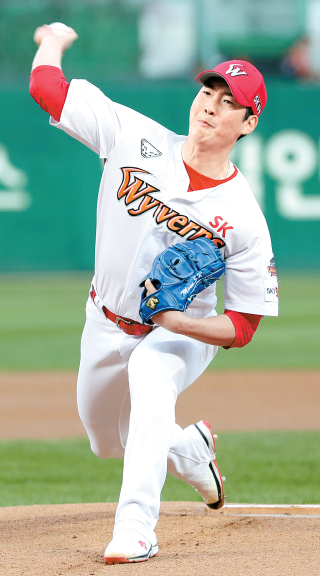 Moon Seung-won of the SK Wyverns throws a pitch during a game against the Lotte Giants at Munhak Baseball Stadium in Incheon on April 3. [ILGAN SPORTS]

Having started in two games, Moon has a .64 ERA, giving up only one run in 14 innings. However, he hasn’t had much luck when it comes to picking up a win. With Moon on the mound, the Wyverns’ batters haven’t been able to score enough to allow him to take victory.

In Moon’s first start of the season against the LG Twins on March 28, he only gave up one run in eight innings, but Kim Taek-hyeong picked up the win. Then, in his second game on April 3, Moon tossed six scoreless innings against the Lotte Giants, but once again had a no-decision game as the Wyverns lost 3-1, after Moon left the mound.

Although Moon hasn’t picked up a win this season, his performance has allowed the Wyverns to have the strongest team of starting pitchers this year. Along with the two foreign pitchers, the Wyverns have Kim Kwang-hyun, submarine pitcher Park Jong-hoon and Moon as the fifth starter in the rotation.

The following are edited excerpts from an interview with Moon.

Q. You are off to a great start this season. What’s really helping you?

A. I think all my experience is working in my favor. I’m following coach Son Hyuk’s orders well.

What were his orders?

There’s this thing that he tells me every year, which is to have simple thoughts before I throw a pitch on the mound. Just focusing on that has allowed me to get good results.

What did you work on during the offseason?

Rather than working on a new pitch, I worked more on control. Comprehensively, it’s good to throw a pitch close to the strike zone. I thought about the commands and practiced a lot. Once my command got batter, I was seeing better results.

It must have been hard to improve just by practicing. How did you get better?

I changed my practice routine. Before, when I practiced in spring training, I pitched with different targets. I would throw a pitch close to the body, the next one outside of the strike zone and then the next pitch would be a curveball.

Now, I just focus on throwing a pitch to the same target every time and that’s helping me get a better feel for my pitches. When I start training, I only pick one target for that day. I would work on my pitches close to the body. I would throw one higher pitch and then throw it to the other side. I feel like all those things are stacking up to [a good] result.

You’re not getting much support in terms of runs. Are you OK with it?

Last year, I had a lot of concerns and I doubted whether I would be able to pitch like this in the next game. I’ve had that thought when I didn’t pick up a win even after I pitched well. But that’s not the case anymore. I just try to focus on each game. My teammates have been apologizing to me a lot [for not being able to score as much], but they’re helping me a lot in defense. They’re playing so well that I’m thankful to them. They’ve been making a lot of catches that could have been hits.

Do you think your positive thoughts and experience are helping you this season?

Experience is definitely important. Based on my experience, when I started worrying about things that have already happened, it made it worse. There’s no need for that. I shouldn’t be thinking about the things that I can’t do and instead only focus on things that I can control: that gives me good results.

You are rated as the strongest fifth starter in the league. How do you feel?

Last year, I really wanted to be the fourth starter. I wanted to pitch in a better spot. But now that I look back at it, I don’t think it has much meaning. The most important thing is that I’m pitching right now. My starting spot in the rotation is unimportant. It’s important that my team’s playing well while I’m pitching and that I’m needed by the team. The order of things doesn’t have much meaning.

Were you expecting your opposition batting average to be so low?

That’s something I never thought of. But by the time the season ends, I think it’ll all be the same so I’m not going to put much meaning behind it.

What is your goal right now?

This year, instead of picking up 10 wins, I want our team to win the games that I start in. Rather than picking up a win for myself, the team’s victory is my priority. That’s first. Second, I would like to allow about 10 less home runs this year. Over the last two years, I’ve allowed too many home runs, so if I can lower that by like 10, I think my ERA will go down quite a lot.