Son Heung-min proves to be the hero Spurs need

Son Heung-min proves to be the hero Spurs need 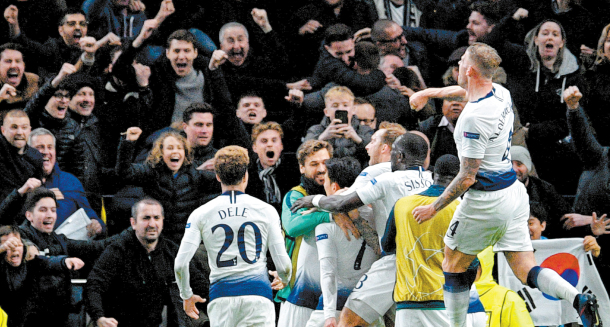 Son Heung-min, No. 7, and Tottenham Hotspur players celebrate after scoring a goal during the first leg of the UEFA Champions League quarterfinal match against Manchester City at Tottenham Hotspur Stadium in London on Tuesday. [EPA/YONHAP]

After a scoreless draw, Son finally broke the silence in the 78th minute, finding the back of the net with a strike off his left foot after receiving a pass from Christian Eriksen. With Son’s goal, Spurs won the match 1-0.

“It was an unbelievable game,” manager Mauricio Pochettino told BT Sport. “It was so tough. But it is still Manchester City and there is a second league. We are happy as we showed great quality. The performance was good but there’s still 90 minutes to go.”

This was Son’s 18th goal of the season and his first in the Champions League since the first leg of Spurs’ round of 16 tussle with Borussia Dortmund in February.

“As a team, we never give up, we fight until 90 minutes,” Son told BT Sport after the game. “I think we deserved to win, we were more clinical than them. I like this stadium, it is amazing to play here, I am grateful for the opportunity to play at this stadium.”

During Spurs Premier League match against Crystal Palace on April 4, Son made history by scoring the first-ever goal in Spurs’ new stadium.

Thanks to the team’s win on Tuesday, Spurs only need a draw when they face Manchester City at City of Manchester Stadium in Manchester on April 18 to advance to the semifinals.

While Spurs are at an advantage in the second leg, the team was struck with bad news during the game. Star striker Harry Kane had to leave the pitch earlier than expected due to an ankle injury and is expected to be out for the rest of the season.

“We are going to miss him - maybe for the rest of the season,” Pochettino told BT Sport. “It is a worry for us. We hope it is not a big issue. But there is not much time to recover. He twisted his ankle so we will see how it reacts in a few hours.”

As Spurs are once again missing Kane from the exact same injury as a few months ago, the club will rely on Son to make up for the England captain’s absence.

Last time Kane was out, Son ably stepped up to the plate. In 12 matches he scored 11 goals, keeping Spurs comfortably in contention without Kane of midfielder Dele Alli.

Son’s performance at the time was good enough to see him named London’s 2019 Player of the Year in March.

“We perform well, we fight well and the 90 minutes next game is also important,” Son told BT Sport. “But it’s football again. We should just enjoy like today and fight all together.”

Ahead of the Champions League game, Spurs will continue its regular season on Saturday as it hosts Huddersfield Town.

In the Premier League, Spurs are currently ranked fourth with 21 wins, one draw and 10 losses, totaling 32 points.

“Now we need to recover the players and deliver again against Huddersfield on Saturday [Premier League at home, 12:30 p.m.],” Pochettino was quoted as saying on the Spurs website.

“That’s such an important game and three points. It will be tough and we need the same motivation and to play the same way. We are confident we can deliver the job again.”