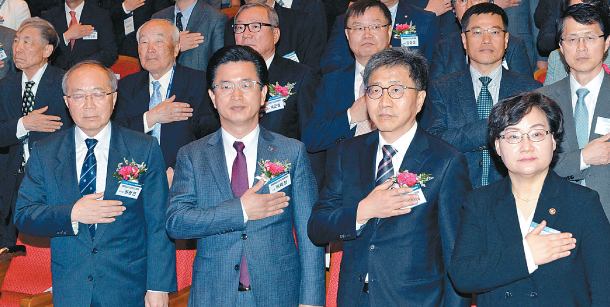 The heroes of atomic energy are feeling underappreciated.

On Tuesday, the Korea Atomic Energy Research Institute (Kaeri) commemorated the 60th anniversary of its founding at the National Science Museum in Daejeon.

Amano Yukiya, director general of International Atomic Energy Agency (IAEA), delivered a congratulatory message by video link, saying that the institute has been contributing in many ways to the IAEA and to the world.

She left in the middle of the event.

Founded in 1959, Kaeri held its birthday celebration amid government inattention and antinuclear protests. The event was much smaller than the 50th anniversary bash.

Lee Ju-ho, the minister of education, science and technology, came to the 2009 celebration. At another ceremony commemorating a half century of atomic energy held in April the same year, Lee Myung-bak, the former president of Korea, delivered a video message. A total of 100 high-ranking officials, including ministers, participated in the event.

Vice minister Mun Mi-ock seemed to be conscious of the negative atmosphere at the event.

“We are not mistreating the Korea Atomic Energy Research Institute,” she said. “We are going to separately reward them on Atomic Energy Day, on Dec. 27.”

She praised the 60-year history of the institute, pointed out the safety issues in recent years and said that she hoped the institute would develop based on people’s trust.

“At a festive time, rather than making congratulatory remarks, she just made excuses,” said Kim Si-hwan, former deputy director of Kaeri. “It was lame, and it would have been better not saying it at all.”

During a presentation and debate on the achievements of Kaeri after the ceremony was finished on Tuesday, the mood was quiet but determined.

“Investment in the institute over the past 40 years has generated 164 trillion won [$143.9 billion]” of value, said Ahn Doo-hyun, a senior research fellow at the Science & Technology Policy Institute. “The effect on the economy compared to the amount invested is 15.9 times.”

Hahn Do-hee, director of the IAEA’s nuclear power division, argued that atomic energy will continue to be a major source of energy to conserve the environment and reduce carbon.

Kim Si-hwan cautiously added that the institute is essential in the development of the atomic energy business and has built a competitive supply chain for atomic energy.

“If this base is destroyed by a policy that aims to phase out nuclear power, Korea can no longer lead atomic energy in the future, so the nuclear phase-out should be eliminated by all means,” warned Kim.

“I don’t know why we, who have put effort in day and night to build independence in energy, have to be treated as a deep-rooted evil like this.”