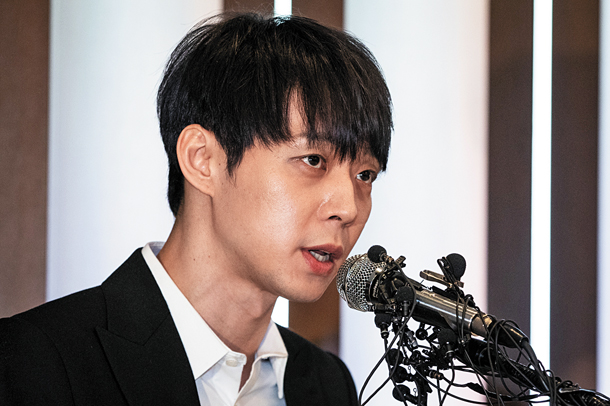 Park Yu-chun claimed that he is not the celebrity who recommended drugs to dairy heiress Hwang Ha-na during a press conference held on Wednesday evening.

“I was aware that she had been taking sleeping pills for her depression, but I have no relation to those drugs,” he said.

“Nor did she mention her record with drugs or talk about illegal drugs in front of me. I heard that her depression got worse after [we] broke up […] But I was very shocked and saddened to hear about her through the news.”

Park explained that he had been suffering from severe depression and anxiety issues after being sued for sexual assault, even though his name was cleared by the court.

“I spent a long time being investigated, humiliated by the social reproach and the ethical guilt, even though I was proved not guilty by the law,” he said.

According to Park, despite the fact that he took medication, he never took any illegal drugs as rumored in the recent days.

“I was so scared that people could mistake me for the star who recommended Hang Ha-na the drugs […] But I decided to come forward and tell you myself, because I did not take any drugs,” Park said.

Park concluded the meeting with words that he will take the police investigation seriously, but again stressed that he was telling the truth as “he cannot imagine taking the drug that would ruin his life.”

Hwang, 31, was taken into custody on April 5 for selling 0.5 grams of methamphetamine and also using the drug for herself in September 2015. She claimed that “a certain celebrity” had lured her into the illegal act.