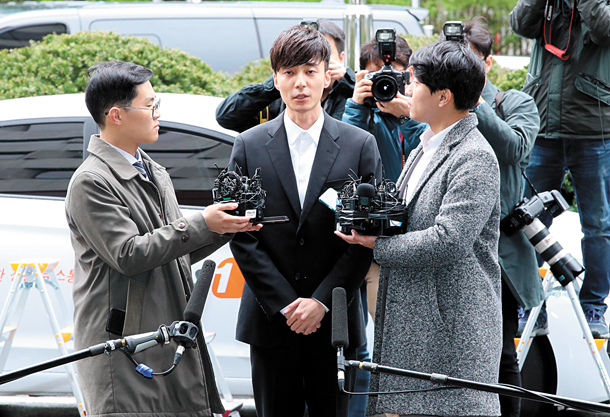 Singer Roy Kim was called in for police questioning on Wednesday at around 3 p.m., a day after flying back to Korea.

Kim has been booked by the police for sharing illegal photographs in a KakaoTalk group chat with fellow celebrities, including singer Jung Joon-young.

“I apologize to all my fans and family who have supported me dearly, and the public for worrying them,” Kim said to the local press before entering the Seoul Metropolitan Police Agency in central Seoul. “I will sincerely cooperate with the police investigations.”

He did not answer reporters’ questions about whether it was him who took the picture or if he was aware of the fact that sharing explicit pictures is illegal.

It was revealed on April 2 that Kim was in the controversial group chat where Jung had uploaded the illegal videos he had taken without women’s consent.

On April 4, the police booked Kim on charges of uploading an illegal photograph himself as well, although they have not yet determined whether it was taken by the singer or not.

Kim arrived in Korea on Tuesday morning without notifying local press, saving himself from a swarm of spectators.