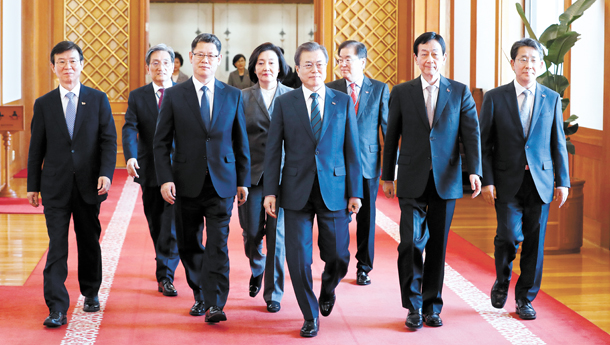 Ministerial appointments have been made despite opposition parties’ vehement objections. Pressing ahead with his appointments, President Moon jae-in has often said, “The ministers who were met with opposition have turned out to perform better.” I did a quick fact check and concluded that this is not the case.

Eleven ministers have been appointed without approval from the National Assembly since the launch of the Moon administration 2 years ago. Among them, Defense Minister Song Young-moo was replaced over the martial law document controversy. SMEs and Startups Minister Hong Jong-hak received 53 points out of 100 points in his performance score. It was the result of the evaluation of his performance by 141 businessmen. Only 20 percent responded positively when asked whether Hong contributed to the economic activities of medium-sized businesses, while 46 percent were negative.

The Foreign Ministry had more controversies — from using the wrong name for the Czech Republic to a creased flag — under Minister Kang Kyung-wha. Environment Minister Cho Myung-rae caused confusion by announcing the dismantling of the dams in the Four Rivers Restoration Project. The Fair Trade Commission’s Kim Sang-jo has repeatedly made slips of the tongue, including “I am late because I was punishing the conglomerates.”

KBS, under president Yang Seung-dong, is constantly questioned over its fairness and objectivity. At the time of the Goseong fire, the public broadcaster was criticized for airing regular programming by controversial entertainer Kim Jae-dong rather than launching an emergency broadcast.

I am only talking about the ministerial-level figures who were involved in unusual incidents. But can they say they are not responsible for the Moon Jae-in administration’s declining approval rating? In the beginning, the administration had an 84 percent approval rating by a Gallup Korea survey. Lately, it has slipped down to 41 percent — I wonder, what is the standard that determines whether a minister is doing well?