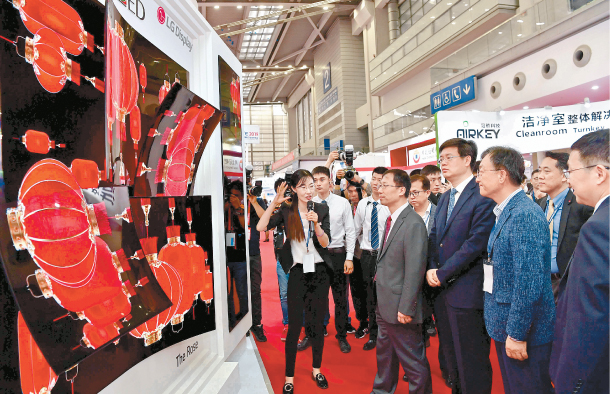 Visitors on Tuesday look at “The Rose,” an artwork made with organic light emitting diode (OLED) display panels, exhibited at LG Display’s booth at the China Information Technology Expo 2019 held from Tuesday through today in Shenzhen, China. [LG DISPLAY]

SHENZHEN, China - LG Display expects China to become a major market for its organic light-emitting diode (OLED) panels, with its first OLED panel factory in the country due to start operations from the third quarter of this year.

While China currently accounts for roughly 10 percent of LG Display’s global OLED sales, that percentage will continue to grow, said Ko Kyu-young, head of global promotion for the LG Display’s TV business unit, on the sidelines of the China Information Technology Expo 2019 (CITE 2019) that kicked off Tuesday in Shenzhen.

The expo, hosted by China’s Ministry of Industry and Information Technology and the People’s Government of Shenzhen Municipality, is one of the largest exhibitions in Asia and involves more than 1,600 companies this year.

LG Display has been looking to shift its focus from liquid crystal displays (LCDs) to OLED as demand and profitability of LCD falters. OLED screens do not require a backlight to show color as each individual diode lets out its own light, unlike TV panels of the past including LCD.

“Beginning this year, OLED panel adoption will start to actively grow in the Chinese TV market, in time with the opening of our Guangzhou factory,” Ko said.

“But this year, Hisense started exhibiting an OLED TV lineup, shifting its strategy,” Ko said. “This has big implications.”

Hisense did have OLED TVs exhibited at its CITE 2019 booth. An employee at Hisense’s booth said they will be using both quantum-dot applied panels and OLED panels, but declined to say more on the company’s future strategy.

Ko said that its Guangzhou facility, currently in construction, will support growing demand for OLED panels in China.

The facility will initially start producing 60,000 8.5-generation OLED sheets, according to LG. Each 8.5-generation sheet can be turned into six 55-inch OLED panels.

LG said the OLED TV market in China will grow by roughly 70 percent on year this year, with 270,000 OLED TVs expected to be bought this year. The figure will jump to one million by 2021, according to IHS Markit.

Ko added that while the largest OLED TV market is currently Europe, China may take that crown and account for 22 percent of global OLED TV sales by 2022, based on data from IHS Markit and other market research agencies.

At the Chinese exhibition, the display maker exhibited its 88-inch 8K Crystal Sound OLED TV, which can emit sound from the display without having a separate speaker along with different kinds of 65-inch and 77-inch OLED TVs.