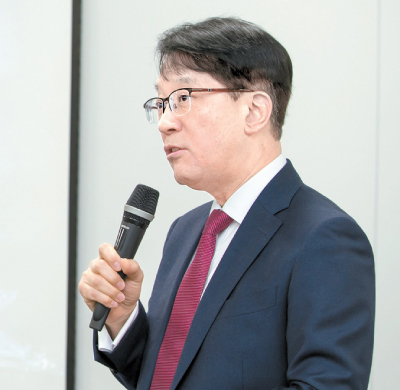 Samsung Electronics will offer 61.7 billion won ($54 million) in financial support to 44 science projects - from research on the restoration of DNA to a silicon patch that monitors muscle movements and gathers information to help people with hearing or language disabilities communicate better.

The subjects were selected by the Samsung Science & Technology Foundation as the funding recipients for this year’s first half. Funded by the electronics company, the foundation has selected academic projects in pure science, material and ICT twice a year since 2013.

Kim Seong-keun, the foundation’s newly appointed head and a chemistry professor at Seoul National University, said that the focus was on finding adventurous subjects that could be “world’s firsts,” even if it meant a lot of them would fail along the way.

“When it comes to scientific research, failure is natural because it’s about discovering realms we don’t know about,” said Kim in a press briefing Wednesday in central Seoul.

“The government has an R&D budget of 20 trillion won, but our foundation moves in a different direction in that we’re on the search for projects that are adventurous, unpredictable and can push frontiers.”

Around 50 percent of the academics funded by the foundation were young professors aged under 43 years. Most of them had finished studies recently and were therefore in need of financial support to pursue new projects.

Most projects will take three to five years to complete, but if the study outcomes were of a high quality and have the potential to have greater ripple effects, the researchers are able to receive additional funding to further develop their ideas, Kim said.

One project selected this year is a study on how damaged DNA repairs itself inside a cell. DNA damage can lead to cancer or immune diseases. A team led by Lee Ja-yil, a professor at the Ulsan National Institute of Science and Technology’s School of Life Science Studies, plans to design technology to observe how chromatin, the genetic material made up of DNA and protein found in human cells, repairs itself after damage.

If they are able to find out how the self-healing process works, this could lead to the development of treatments for DNA-related diseases, said Lee.

An interesting subject selected in the ICT sector is a project to design of silicon skin patch that monitors the movements of the skin near the mouth and throat to help people with hearing or speech impairments.

The patch will contain a sensor to learn patterns to better perceive what the wearer is trying to say so that in the future, scientists can find a way to help them better communicate in ways other than sign language. Yu Ki-jun, a professor at Yonsei University’s department of electronic engineering, said the technology’s usage could be expanded to replace radio sets for pilots and soldiers.

Since its launch in 2013, the Samsung Science & Technology Foundation has provided 666.7 billion won in funds to 517 academic studies. The 10-year goal it set at its launch in 2013 was to spend 1.5 trillion won by 2023. In the last five years, the funded projects produced 500 local patents, 130 foreign patents and several start-ups based on the technology.