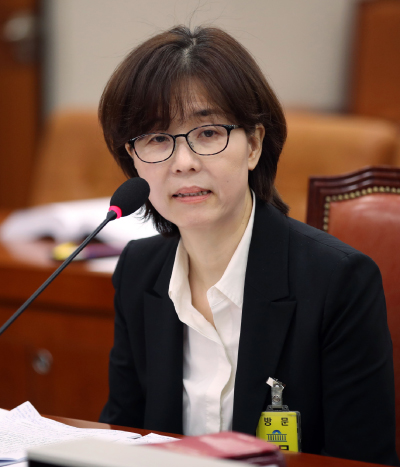 Lee Mi-sun, a justice nominee for the Constitutional Court, is grilled by lawmakers on Wednesday over suspicions that she and her husband made money on stocks using inside information from trials they participated in. [YONHAP]

Lee Mi-sun, President Moon Jae-in’s nominee for the Constitutional Court, was grilled by lawmakers on Wednesday over suspicions that she and her husband made money on stocks using insider information from trials they participated in.

The National Assembly held a confirmation hearing for Lee, a senior judge of the Seoul Central District Court who was nominated to be made a Constitutional Court justice by Moon last month. At the hearing, the lawmakers scrutinized her and her husband’s stock investments.

Oh is a partner at one of Korea’s largest law firms. After serving as a judge for 13 years, he joined Lee & Ko, mainly covering intellectual property litigation. When he was a judge, Oh served various courts, including the Patent Court from 2006 to 2009.

“While serving as a judge from 2013 until 2018, you made 367 trades of 373,433 shares of stock in 67 companies,” Rep. Joo Kwang-deok of the Liberty Korea Party (LKP) said at the confirmation hearing. “Your main job seems to be a stock trader, while being a judge is a secondary job.”

“I concentrated my time to work as a judge,” Lee said. “My husband was fully delegated to manage our assets.”

Joo asked whether Lee’s husband secretly traded using her account, and Lee said Oh made trades in her name. “I have given him comprehensive permission for stock investments on behalf of me,” she said. “I was informed about the investments when we file annual assets report.”

The two firms are the largest and second-largest shareholders of Gunjang Energy, which is reportedly preparing to go public on the Kosdaq market. “Before Gunjang Energy’s preparation was reported by media, Lee and Oh made massive investments in eTEC Engineering and Construction and Samkwang Glass,” Joo said. “They are suspected of using inside information to make the investments.”

Joo also said that Oh was hired in April 2017 and January 2019 in regard to patent litigation for OCI affiliates. “While defending the OCI affiliates, Oh could have obtained more information on Gunjang Energy’s preparation to go public,” Joo said.

Lee denied the accusations. “According to my husband, they are medium-sized firms with solid performances,” she told lawmakers.

Lawmakers also criticized Lee for not recusing herself from a trial linked to eTEC Engineering and Construction last year. An insurance company filed a civil suit against a subcontractor of the construction company over its engineer’s negligence, and Lee was the presiding judge in the case. At the time, Lee ruled in favor of the subcontractor.

She also denied that her husband used inside information when he purchased shares of the construction company after the trial. “I had no access to any inside information,” she said. “I was also told there was no illegality in the investment.”

The JoongAng Ilbo reported Tuesday Oh’s suspicious stock investments. According to trading reports from 2012 to 2019, Oh purchased nearly 650 million won worth of shares of eTEC Engineering and Construction. Oh bought the stocks over 34 times from Jan. 2 to 17, 2018, shortly before the company announced a major deal on Feb. 1 of that year, a business contract worth 270 billion won. Its stock price skyrocketed to 159,800 won the next day, its highest price for the previous 52 weeks. Oh sold 58 million won worth of stock on Feb. 20 and 21, 2018.

Even the ruling Democratic Party (DP) criticized Lee for the couple’s stock investments.

“When I was a prosecutor, I was told stock investment was prohibited. The people think prosecutors and judges are senior public servants because they can access information about the government and companies that ordinary people cannot,” said Rep. Keum Tae-sup of the DP. “Judges and prosecutors must not make stock investments because you will lose the people’s trust.”

He asked Lee whether she thought she met the ethical standard to serve on the Constitutional Court bench.

“I tried to live an honorable life as a public servant, but I realized that I have failed to meet the people’s expectation,” Lee said. “I humbly accept the criticisms.”

As Lee was being grilled, the opposition LKP demanded President Moon fire his senior civil affairs secretary Cho Kuk for yet another nomination fiasco. Last month, two of seven minister nominees failed to be appointed due to real estate speculation and academic integrity scandals. Moon ended up withdrawing one nomination, while another nominee dropped out voluntarily.

“Many said President Moon is not punishing Cho for the failed vetting of the nominees because he needs to reform the prosecution,” said LKP Rep. Lee Ju-young, deputy speaker of the National Assembly. “But no reform will succeed if you insist that you are clean, but other people are dirty.”

Rep. Min Kyung-wook, spokesman of the LKP, said Lee must face criminal charges. “She is a judge, not just any senior public servant,” Min said. “But she used inside information obtained through trials and made stock investments. This is a crime and she must be punished.”