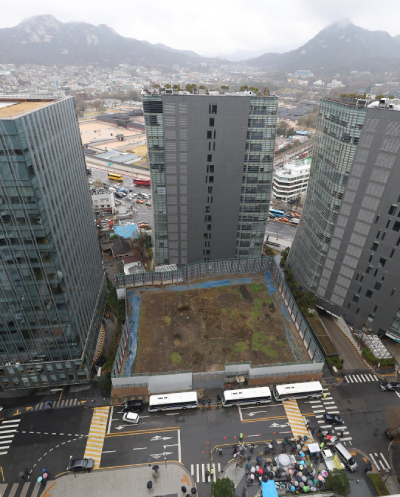 The site where the new Japanese Embassy building was supposed to be built. [YONHAP]

A district office in Seoul said Wednesday that it revoked the Japanese Embassy’s permit to construct its new building because the embassy delayed construction work for unknown reasons.

The move comes amid souring ties between Seoul and Tokyo over historical disputes.

Officials from the Jongno District Office, central Seoul, told local media that the construction permit was officially canceled on March 4. It was only after the Chosun Ilbo, a South Korean conservative newspaper, broke the news early Wednesday that Jongno officials acknowledged the report hours later.

According to Jongno authorities, the Japanese Embassy received permission from the district office in March 2015 to construct a new embassy building in Junghak-dong, Jongno District, which was planned to have six stories above ground and three stories underground on a land area that was about 2,381.5 square meters (25,634 square feet). The Japanese government owned the land, but it still needed permission from the district to construct new buildings on it, according to Jongno officials.

Jongno District officials said they contacted the Japanese Embassy numerous times and told them to either file for another extension or start construction. A year-long extension is normally allowed only once, but the district said it once thought about working around that rule with the Japanese Embassy if they had “a special reason,” allowing the embassy a second year-long extension.

But every time Jongno District asked for an explanation, the Japanese Embassy was said to have replied that the Japanese government in Tokyo was not responding. Nearly two years later, on Jan. 30 of this year, the Jongno District informed the embassy that it would revoke the construction permit, and the permit was revoked on March 4.

A spokesman for the Japanese Embassy told the Korea JoongAng Daily on Wednesday that the embassy would consider “various circumstances” to decide its future actions, without elaborating further.