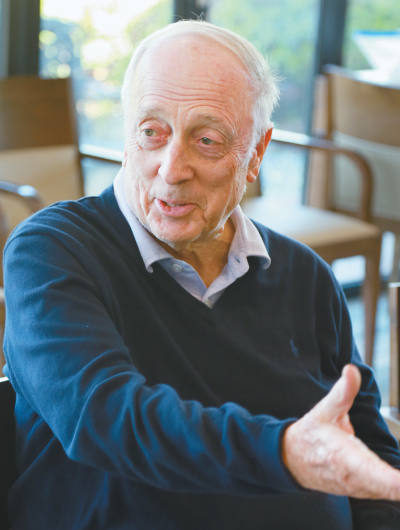 Rees Jones speaks during an interview at Asiad Country Club in Busan on April 4. [LPGA]

BUSAN - After the KEB Hana Bank Championship ended last year, the LPGA was on the hunt for a new home in Korea. Asiad Country Club in Busan looked like just the place, but it needed some work done before the Tour could move in - enter Rees Jones.

Having redesigned multiple championship courses, Jones has earned his reputation as one of the best golf course architects in the industry, nicknamed the “The Open Doctor” because seven courses he has worked on have hosted the U.S. Open. 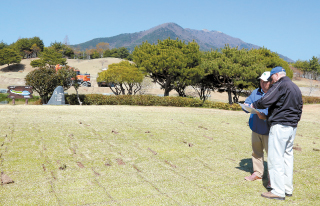 After an undergrad at Yale and graduate studies at Harvard, Jones started his career at his father’s firm, Robert Trent Jones Inc. Then, in 1974, after 10 years working under his father, Rees Jones established his own company, Rees Jones Inc.

Robert Trent Jones Sr. designed his courses with a philosophy of easy bogeys and hard pars. Yet the younger Jones takes a different approach, focusing more on creating courses that are fair, challenging, continually interesting to play and visually exciting.

Although he designed multiple championship courses, Rees Jones likes to focus first on the average player. Whether designing or redesigning a course, Rees thinks of the weekend players first and the pros that might turn out for huge tournaments second.

Having designed or redesigned over 225 golf courses throughout his career, Jones has accepted his first job in Korea, to renovate the Asiad Country Club. The LPGA Tour players will visit the course for the first time in October this year to compete at the inaugural LPGA International Busan, hosted by BMW Group Korea.

Jones, along with Bryce Swanson, vice president and the senior designer at Rees Jones Inc., sat down for an interview with the Korea JoongAng Daily at the Asiad club in Busan on April 4.

Q. How will the Asiad Country Club course change after these renovations?

A. It’ll be different. It isn’t like [the players] played the tournament last year and now we’re doing it over and they’re playing. So they’re not going to know totally what we did. They’re going to like it a lot more because we’ve taken a lot of penalty areas out that were overpenalizing.

We’ve really tucked some bunkers in places that’s going to make them think, which means they’ll try to get it next to the pin or go for the green. I think they’re going to like it because it’s going to be strategic and it’s got a lot of room off the tee, which means they can take out their driver. That’s important to men and women.

What’s good about this site?

First of all, it’s the people. The most important aspect of our profession is having really good people to work with because we’re a team. The owner, the LPGA and ourselves, we’re all a team. And I think that’s what’s so attractive about this job: everybody’s working well together and shapers are working well together and contractors are good - we’re going to achieve our goal.

I always follow the people and then the site - I’ve been very fortunate to get great sites. But I think on this site - I think the vegetation is good, the typography is very different. It’s quite natural so you don’t have to overshape things. This golf course is perfectly suited.

When you first looked around, were there any other courses that came to mind?

Maybe Baltusrol [Golf Club in Springfield, New Jersey]. It’s got a flow to it like Baltusrol. I think Bellerive [Country Club in Town and Country, Missouri] too.

We were very excited when we first saw it and we really saw that we can do what Asiad wanted done to make it more special. That’s the ideal job for a golf course architect.

We’re very proud of the fact that when you go to our golf courses, you don’t know it’s a Rees Jones golf course. A lot of architects over the years have had a design style that [means] you know exactly who it is. We really adapt to the site and don’t want to have a specific design style. I think you can see that in all of our championship golf courses. [And if] they have to ask you who designed it, I think that’s a compliment.

Once the renovation is done, is this going to be a brand new course?

To everyday golfers, it’ll feel like a brand new course - but it’s not: it’s going to have a whole different personality, that’s why.

Which hole’s going to be the signature hole?

I don’t like signature holes because I don’t want one hole to be thought to be better than the others. I want each foursome to go out and each one of them has a favorite hole, not the same one.

You’ve worked on a lot of courses around the world. Would you say there’s a difference in the characteristics of courses in North American versus Asia?

Like, you see Bubba Watson cutting a wedge during the Masters. If it’s wide open, there are no trees, then you have to go to the rough to create the chance and all [you have to do] is hack out. So I think that’s why I like the Asian courses. Even trees on the fairway, I think that’s great.

Are there any challenges that you face when designing or renovating golf courses in a country that has a monsoon season like Korea?

Well, we get those in the United States too. I think we get worried about the trees. This is high ground. It’s not like Ocean Forest [Golf Club in Sea Island, Georgia], which is right by the ocean. When hurricanes come up the east coast, we worry. I think this course can handle any storm because the ground is so high.

You’re better known as a renovator than a designer. Do you agree with this?

My fame has come from championship renovations. They call me the “Open Doctor.” I didn’t have a nickname when I was a kid so now I have one, and that’s OK.

How many of the courses that you renovated or designed have hosted major tournaments?

But I don’t know if I can break it down because some of them, some of the PGA courses and U.S. Open courses, are the same courses. This year we’re having the PGA at Bethpage Black [Course in Long Island, New York] and the Ryder Cup goes there in 2024. So it sounds like more courses.

Like Lake Merced [Golf Club] outside of San Francisco, where they played the Swinging Skirts tournament [and] the Mediheal [Championship], that’s like one of the women’s favorite golf courses. So I go to that tournament and I learn how they set it up and how they play it. So I’m ready for the next course.

My father taught me that: When I was a kid, at Baltusrol, he had me measure his drives in 1954 so I’d know where all the balls would go - I was just a kid, and he didn’t pay me.

Your brother has your father’s name, Trent Jones Jr. Growing up and taking up the same career, do you think that gave you a disadvantage?

You know too much. Yes, he had an advantage. I’ve been very fortunate in that I got the U.S. Open at [The Country Club in] Brookline, [Massachusetts]. I did that mainly through my personality. There were three other designers and that was my first U.S. Open and championship rebuild.

They asked me, “Why should we select you?”

They said, “When can you start?”

I think I had a disadvantage, but now, later in life, I have the advantage.

At the Asiad course, how do you hope to challenge players?

The fifth hole - it’s tough - we’re trying to make it easier. This is the most famous hole on the golf course because it’s the hardest. We’re not making it easier for accomplished players. We’re just trying to make [it so that] the everyday player can get through that hole too.