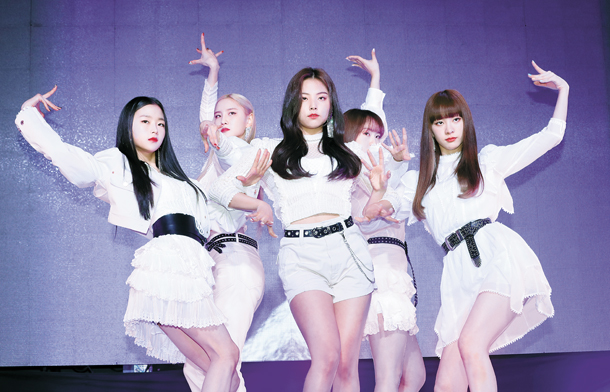 Rookie girl group BVNDIT performs in front of local press on Wednesday at the Hongdae Muvhall in western Seoul for their debut showcase. The five-member act comes as the second project by MNH Entertainment, after solo singer Chungha. From left are members Seungeun, Simyeong, Songhee, Jungwoo and Yiyeon. [NEWS1]

A group of bandits has entered the K-pop world and they’re hoping to steal your heart - not your money. On Wednesday, a new five-member act named BVNDIT made their debut with their three-track EP “BVNDIT, Be Ambitious!”

The group is MNH Entertainment’s first project after Chungha, the K-pop diva whose songs have topped the charts since her solo debut in June 2017, a year after she was a part of the project girl group I.O.I that was put together through Mnet’s audition program “Produce 101” in 2016.

The group’s name BVNDIT - pronounced Bandit - stands for “Be Ambitious N Do It,” a message they hope to tell not just the listeners, but to themselves as well.

“I feel like I’m dreaming,” member Jungwoo told local press at their debut showcase held Wednesday afternoon at the Hongdae Muvhall in western Seoul. “Our name means that you should dream big and step into the future.”

The members were quite frank and confessed that they were, at first, taken by surprise when they heard that their band name was going to be what it is today.

“We were all surprised at first, but we were okay after we heard what it meant,” said Yiyeon, the leader of the group.

“I think the name gives off a very strong vibe, which I think suits us well. It’s more powerful than it is pretty,” said Simyeong. “I do remember being surprised a bit at our first photo shoot, though. I thought that we would be going with a very strong image, but we all wore dresses and looked so feminine, and [the contrast] was very memorable.”

The girls did feel the pressure of having to follow in the footsteps of Chungha, who is known for her outstanding vocals and dance skills that she has shown off through many of her hit songs like “Why Don’t You Know” (2017), “Roller Coaster” (2018) and “Gotta Go” (2019).

“We were quite burdened by the nickname ‘Chungha’s little sisters’ at first, but we practiced so much because we had to live up to that name. At the end of the day, it’s made us become better,” said Yiyeon.

She added, “Chungha is known as a very skilled singer. But that pressure helped us stick together and try harder.”

Their training paid off at the showcase. Jungwoo’s microphone fell off in the middle of their performance of the song “Hocus Pocus” due to the quick choreography, but she continued without any mistakes, holding the microphone in her hands.

“Hocus Pocus,” the lead track off BVNDIT’s first EP, is the result of the effort they put into making a good first impression. A trendy dance track, the song is meant to energize listeners and steal their hearts, according to the members of the group.

“It’s a very catchy song,” said Songhee. “The lyrics are about how we are going to put our spell on you, so that you will fall [in love] with us.”

“It will be a good listen when you go on a trip,” said Seungeun.

“Or when you wake up in the morning,” Simyeong added.

The other tracks on the EP will also provide listeners the chance to see what the girls have up their sleeves. “Be Ambitious!” comes with its own powerful choreography, while “My Error” proves the band is capable of pulling off emotional ballads with their colorful voices.

As rookies stepping into the spotlight for the first time, the group has two clear role models other than Chungha: the girl group Mamamoo and the boy band BtoB. It’s been two years since the five members were put together to train as a team. They have long dreamed that they will become like the veteran K-pop groups that have showed teamwork on stage.

“We look up to Mamamoo and BtoB so much, and we want to become a group like them. When we saw them, we felt that they were actually enjoying themselves on stage and shared eye contact. They’re our role models,” said Yiyeon.

The spring of 2019 has been full of new groups introducing themselves to the world of K-pop, such as ITZY, Everglow and Tomorrow X Together, but BVNDIT hopes that they will be a group that will have a long career.

“We want to be a group that people are always curious about,” said Seungeun.

“We will be moving forward with goals just as big as our name. I hope you stick by us through our career,” said Yiyeon.