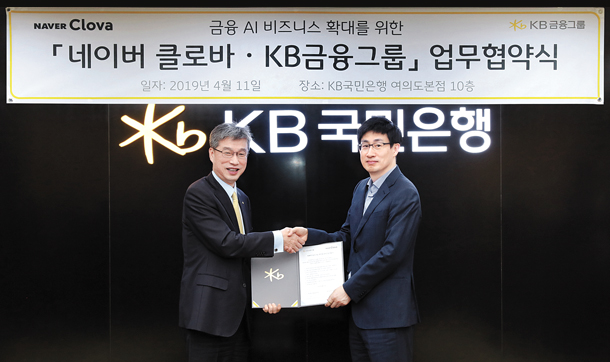 President Hur Yin of KB Kookmin Bank, left, and Shin Jung-ho, co-Chairman at Line, shake hands after signing an agreement to cooperate on artificial intelligence (AI) project on Thursday at the office of the bank in Yeouido, western Seoul. [KB FINANCIAL GROUP]

Large banks are cooperating with Naver to develop technologies that will allow for the more customized, sophisticated financial services.

Clova, short for cloud virtual assistant, was introduced by Naver in 2017. It is a personal assistant that works via the Android and iOS operating systems.

The financial group and Naver are working on technologies that normally have a number of modules: a Machine Learning Module, a Natural Language Processing Module and a Knowledge Representation (Ontology) Module.

The modules are used to collect and transform data, generate accurate predictions and insights, and read and organize text.

Liiv TalkTalk is a KB Kookmin Bank mobile banking app. It can provide a number of financial services in an instant messaging environment.

A major benefit of the collaboration is security.

“By making a separate engine for the advanced speaker, the feature will be able to store financial information in a secure way that separates it from external data,” said a source at the KB Financial Group.

The signing ceremony, held at the KB Financial Group’s office in Yeouido, western Seoul, was attended by company President Hur and Shin Joong-ho, co-chairman of Line, an instant messaging operator owned by Naver.

Just last week, Woori Bank signed a memorandum of understanding with Naver to establish a lab. At the new center, experts from both companies will develop high-tech services and systems.

“We expect to see far-reaching transformations across the board - from customer services to bank task management,” a source at Woori Bank said.

The banking unit noted that the cooperation will also center around Clova.

“Ahead of the announcement, we already finished the technical assessment of natural language processing and Optical Character Recognition (OCR).”

OCR is the conversion of text images to digital text.