Samsung Galaxy A80 has a swiveling camera

Samsung Galaxy A80 has a swiveling camera 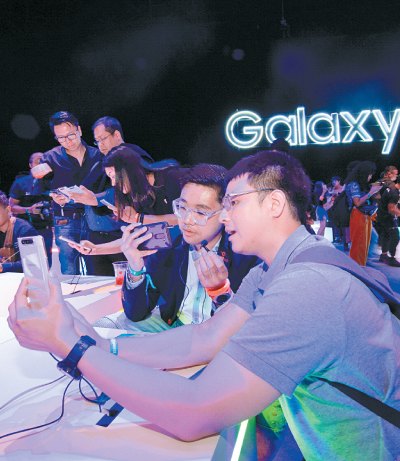 Visitors attending the launching ceremony of the Samsung Galaxy A80 test the smartphone during the event held in Bangkok on Wednesday. [SAMSUNG ELECTRONICS]

Samsung Electronics’ Galaxy A80 is Samsung’s first smartphone to come with a rotating camera.

The latest model in Samsung’s budget A series was revealed Wednesday in Bangkok. Unlike most smartphones that come with cameras on both the front and the back of the phone, the A80 has three cameras on the back that are lined up in a row.

If a user wants to take a selfie, the top of the rear side of the phone slides up and the entire camera module flips over so that it is facing the user. This swivel happens automatically when the user turns on the selfie mode.

Samsung says the main camera can take 48-megapixel photos. The other two cameras are a “3-D Depth camera” that helps add more dimension to videos and an ultra-wide camera that captures across 123 degrees. An “Intelligent camera” function was added as well, which categorizes the photo into 30 types, whether it’s a landscape, food or a portrait, to optimize camera settings.

A rotating camera that slides up from the phone also allows for a perfectly rectangular, notch-less front screen. The display is also covered with sensors that enable users to unlock the device by putting their finger anywhere on the screen.

“The Galaxy A80 will offer the best mobile experience at a time when consumers constantly share moments live,” said Samsung Electronics President Koh Dong-jin, in charge of the company’s mobile phone business, during Wednesday’s press event in Bangkok.

The A80 comes in black, gold and white. Samsung said the product will start releasing in the global market from May 29 but has not specified in which market it will launch first. Whether the product will also be released in Korea and at what price are not yet decided, a spokesman said.