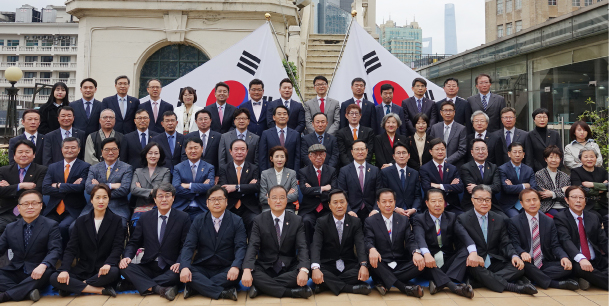 Representatives of the Korean National Assembly, including floor leaders of five political parties, pose for a commemorative photo on the rooftop of the YongAn Department Store in Shanghai, Thursday, recreating a famous photograph from New Year’s Day in 1921 of the members of the Korean provisional government on its centennial anniversary. [YONHAP]

Korea celebrated the 100th anniversary of the establishment of the Korean provisional government in Shanghai on April 11, 1919, a major part of the movement for independence from Japanese colonial rule. Thousands of people including Prime Minister Lee Nak-yon, former independence fighters and their relatives took part in a government ceremony commemorating the anniversary in Yeouido Park in western Seoul Thursday evening.

Following the March 1 Independence Movement of 1919, which consisted of nationwide grassroots mass demonstrations in which the people proclaimed Korea’s independence from Japanese colonialism, activists established the provisional government of the Republic of Korea in Shanghai on April 11.

The ceremony included the lighting of a torch of independence and a recitation of the proclamation of the provisional government’s charter enacted on April 11, 1919, which established the country as democratic republic system, laying the roots for the current Republic of Korea.

Festivities included a joint performance by the National Chorus and Korea Coop Orchestra as well as performances by actors honoring patriots and waving Taegeukgi, the national flag, shouting Manse or “long live,” referring to the independence of Korea.

The ceremony began at 7:19 p.m., or 19:19 in the 24-hour time system, to emphasize the year that gave birth to both the independence movement and the establishment of the provisional government. The Ministry of Patriots and Veterans Affairs said it chose Yeouido, where members of the Korean Liberation Army, the provisional government’s armed forces established in 1940, arrived on a C-47 transport plane in 1945.

Prime Minister Lee attended the ceremony instead of President Moon Jae-in, who is currently in Washington for a summit with U.S. President Donald Trump. Earlier in the day, Lee Hae-chan, chairman of the ruling Democratic Party, and other lawmakers paid respects to key independence leaders including Park Eun-sik, second president of the provisional government, at the Seoul National Cemetery.

As for the celebrations for the March 1 movement, provisional governments and other organizations marked the anniversary through celebrations such as an event hosted by the Army in front of the Independence Hall of Korea in Cheonan in South Chungcheong.

On Wednesday, a group of some 20 Korean lawmakers including floor leaders of five political parties headed on a four-day trip to Shanghai, the first headquarters of the provisional government, to attend a slew of events marking the anniversary.

A group of 29 leaders gathered on April 10, 1919, and launched the first provisional assembly in Shanghai’s French Concession.