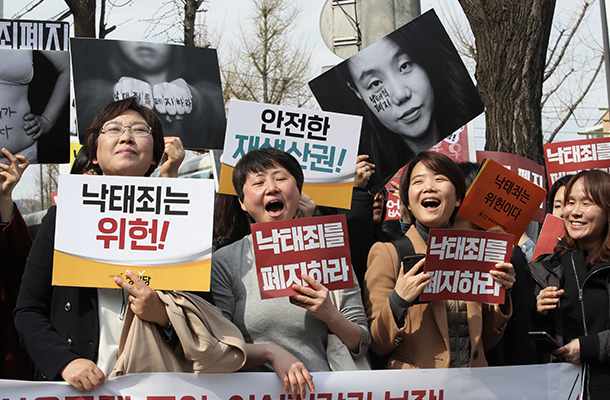 Activists celebrate the Constitutional Court’s ruling Thursday striking down a 66-year ban on abortion in front of the court’s building in central Seoul. [NEWS1]

Korea’s decades-old ban on abortion will soon be lifted after the Constitutional Court on Thursday ruled it unconstitutional and ordered the legislature to act.

The Constitutional Court said Thursday that two articles in the Criminal Act that punish both a mother and doctor for abortions are unconstitutional and the National Assembly must revise them by Dec. 31, 2020. If no revision is made by the deadline, the abortion ban will automatically lose its legal effect starting Jan. 1, 2021.

The ban was introduced in 1953, when the country established the Criminal Act.

The court was reviewing a petition submitted in February 2017 by a doctor prosecuted for performing 69 abortions from 2013 to 2015. He asked the court to rule on the constitutionality of the two legal clauses that ban abortions.

“A woman who procures her own miscarriage through the use of drugs or other means shall be punished by imprisonment for not more than one year or by a fine not exceeding 2 million won [$1,755],” reads Article 269 of Korea’s Criminal Act.

“A doctor, herb doctor, midwife, pharmacist or druggist who procures the miscarriage of a woman upon her request or with her consent, shall be punished by imprisonment for not more than two years,” Article 270 of the act says.

Exceptions are noted under Article 14 of the Mother and Child Health Act. It says a doctor may induce an abortion with the consent of the pregnant woman and her spouse if one of them suffers from any genetic mental disability or physical or contagious disease.

Abortion is also allowed in the case of rape or incest or if the pregnancy threatens the health of the mother.

The court ruled that the abortion ban infringes upon pregnant women’s right to self-determination by assigning absolute priority to the protection of fetal lives.

Of the nine justices on the bench, Justices Yoo Nam-seok, Seo Ki-seog, Lee Seon-ae and Lee Young-jin ruled the two articles in the Criminal Act “uncomfortable,” meaning that the Constitutional Court “acknowledges the law’s unconstitutionality but merely requests the National Assembly to revise it by a certain period while having the law remain effective until that time.”

Three other justices went further and ruled the abortion ban unconstitutional, demanding that it lose its legal power immediately. Lee Suk-tae, Lee Eun-ae and Kim Ki-young said immediately scrapping the ban was unlikely to cause any serious legal confusion or social costs.

Two judges, Cho Yong-ho and Lee Jong-seok, disagreed. They said the abortion ban is constitutional, saying the right to life of a fetus must be protected as much as any newborn. They said there will be more abortions unless the practice is punished, and it is impossible to come up with other measures to protect fetuses.

The current court is far different from that of 2012. All the judges who ruled on the first case are retired, and six new justices started their terms after the Moon Jae-in administration took over in 2017. Constitutional Court Chief Justice Yoo Nam-seok and Justices Lee Eun-ae and Lee Young-jin clearly said they believed the abortion ban was unconstitutional during their confirmation hearings.

With Justices Lee Seon-ae and Lee Eun-ae, the Constitutional Court also now has the largest number of women ever on its bench.
Women’s groups and the medical community welcomed the ruling. Kim Dong-seok, head of the Korean Association of Obstetricians and Gynecologists, said doctors wanted to respect the law, but the law has long been unrealistic.

The Catholic community expressed concerns. The Catholic Bishops' Conference of Korea issued a statement on Thursday to criticize the decision.

“The ruling denies a fetus’s right to live, which is a dignified human being at the moment of conception and has no ability to defend itself,” said Archbishop Hyginus Hee-joong, the president of the Catholic leaders’ group. “It also holds women responsible for unwanted pregnancies, while exempting men.”

He said the Korean Catholic community will continue to support women and men who fought the temptation of abortion and decide to keep their children. He also said its churches are open to help women suffering from emotional and physical after-effects of abortions.