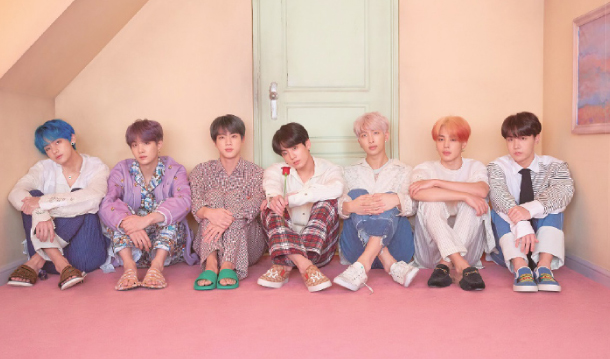 ARMY has been waiting weeks, and it’s finally here.

The latest EP from K-pop megastars BTS, “Map of the Soul: Persona,” was released worldwide on Friday, starting a new chapter of the group’s musical fantasy.

The seven-track EP came not only with a fully-packed story, but also with star-studded list of features including singers Halsey and Ed Sheeran.

Halsey adds her voice to the funky lead track “Boy With Luv” while Sheeran lends his voice to “Make It Right.”

“[The EP] carries the honest stories [of the members] who want to thank their fans all over the world for making everything possible,” Big Hit Entertainment said.

The album touches on the themes of self and love, starting with leader RM’s solo hip-hop track “Intro: Persona,” in which he explores the idea of who he is.

The songs “Mikrokosmos” and “HOME” expresses how one feels grateful for the small things that surround them and the relief of having a home to return to.

“The fans are ‘HOME’ for the members to return to when they feel lonely,” the agency explained.

The compilation also includes three other songs, “Jamais Vu,” “Rocking” and “Dionysus,” which are just as catchy as the others.

Prior to its release, the EP had already sold over three million copies in preorders as of Thursday, according to the distributor Dreamus.

BTS will perform songs from the new EP live for the first time today on the American program “Saturday Night Live.”

Meanwhile, the music video for the group’s 2015 song “Run” surpassed the 100 million-view milestone on Friday afternoon.

The group now has 17 songs whose music videos have been viewed over 100 million times.