Nephew carries on the legacy of Yuhan founder

Nephew carries on the legacy of Yuhan founder 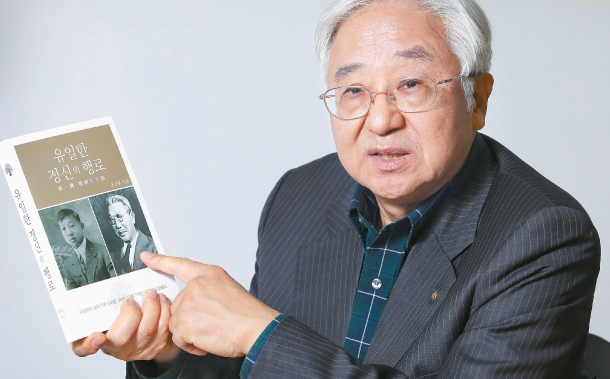 The country’s most famous corporate names like Samsung, Hyundai, LG and SK are largely run by members of their owner families. The public perception of these families is largely negative due to a string of scandals ranging from mistreating staff to drug abuse.

From that perspective, the pharmaceutical company Yuhan is a company frequently cited and looked up to as a model for corporate responsibility.

Established in 1926, Yuhan was the first company in Korea to give out stock to employees in 1936. Its founder New Il-han was the only member of his family running the company.

Yuhan, now the largest pharmaceutical company in Korea by revenue, has been led by non-family CEOs since 1969. New’s nephew Yu Seung-hum, a doctor who worked at Severance Hospital in Seoul, is one of the few people alive who was close to New.

As Yu lived in the same house as his uncle during his childhood, he grew up listening New’s stories. In the last four decades, he collected news articles and historical records on his uncle from Korea, Japan and the United States.

Now working as chairman of the Korea Medical Assistance Foundation, which funds medical fees for families in need, Yu put all the personal accounts he heard as a child and the historical articles he found into one book published last November titled the “Path of New Il-han’s Values.”

“There are about 10 books about Dr. New that wrote down what he did and assume the intentions behind it, but none of them really know the detailed stories on how they happened and the philosophy behind it,” said Yu in an interview with the Korea JoongAng Daily.
Born in 1895 as the son of a successful merchant, New was sent to study in the United States at age nine and attended a military school for boys set up by Korean independence activist Park Yong-man.

While studying economics at the University of Michigan, New became one of the core activists in the United States for Korea’s independence from Japan besides journalist Soh Jai-pil and Syngman Rhee, who later became Korea’s first president. For decades until independence, New wrote declarations, organized marches and even trained for military action against Japan. After graduation, he worked at General Electric as an accountant for two years before he left to start a jarred bean sprouts business.

“At one point, my grandfather scolded him that his education in the United States was not for him to make money but to contribute to the country one day. But a major reason New did business was because activism for Korea’s independence required money,” said Yu. “He placed a lot of the independence activists like Soh in the company’s top positions.”

He returned to Korea in 1925 when Oliver R. Avison, the headmaster of Yonhee College (now known as Yonsei University) and Severance Medical School, suggested that New import medicine, which was in short supply. After years of selling imported products, Yuhan Corporation started making medicine of its own in 1933. The company’s first product was Antiphlamine, a pain relief ointment still sold to this day.

“A lot of the things he did were for the people. His philosophy was that companies had to make profits but, ultimately, the company’s true owners were its customers because they buy the products,” said Yu. After he passed away in 1971, New donated all of his assets to society.

He had a daughter and a son, but neither took over his position as leader of Yuhan. Having grown up in the United States and worked as lawyer there, his son left Yuhan after spending three years in the company. Yu said the two had a different mindset on how to run the business. His daughter, whom New was closer to, headed the Yuhan Foundation, which offers scholarships, and also donated all of her money upon death.

New’s values were inherited from his father, according to Yu. New’s father was a self-made businessman who also financially supported independence movements in the southwest region of Korea and built a Korean women’s school and a Korean church in the city of Yanji, China.

“His life was based on a firm belief in Christianity and affection for his country that started in the boy’s military school under the Japanese occupation,” said Yu. “The book focuses on his values and thoughts so that his entrepreneurship can be correctly understood and passed on to future generations.”