Monsta X begins its ‘We Are Here’ tour

Monsta X begins its ‘We Are Here’ tour

Boy band Monsta X kicked off their third world tour -“We Are Here” - with two concerts in Seoul, on Saturday and Sunday. They will be visiting 18 world cities between June and August. 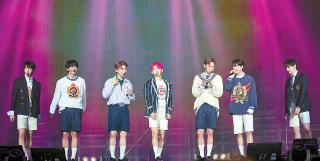 Seven-member act Monsta X kicked off their third world tour on Saturday with a concert at Olympic Handball Gymnasium, southern Seoul. The two-day concert starts a tour that will last through August. [STARSHIP ENTERTAINMENT]

The title of the world tour is derived from the title of the septet’s latest album, “We Are Here,” the last of the two-part album series that came out in February this year. The first part - “Are You There?” - dropped in October. Both albums are sweeping not only local music charts but also the music charts in markets overseas. Monsta X is considered as a true global star with a large fan base that awaits them abroad.

This tour is the group’s third world tour, a remarkable feat for a group that only made its debut four years ago, in 2015.

“We are so grateful that we got to go on the tours, thanks to our fans ‘Monbebe’ all over the world,” said Shownu, the leader of the group.

Monbebe is the official fandom name for the boy band.

“It feels so special because we get to see fans that we don’t always get to see. And we thank everyone for letting us go on a world tour for three years in a row. We’ll try our best with every performance and then come back home safe and sound,” said member Wonho.

Having traveled around the world twice before, the members are ready to show their fans a side of themselves that they haven’t shown before.

“If at first, we were just thinking about showing ourselves to the world, we learned the importance of good teamwork with the fans, too,” said member Joohoney. “Now I think we’ve learned how teamwork comes. I think, personally, that the upcoming concerts will be a chance for Monbebe to really feel at one with us. And we are willing to give all we have for them to feel so.”

Monsta X hopes that they not only get to amuse the fans with the concerts, but also tell the whole world how great K-pop can be.

“We hope that our world tour becomes the reason for the world to see how good Korean artists are at performances,” said Minhyuk.

I.M added, “We’ll show everyone what K-pop really is.”

After their concerts in Seoul, Monsta X will hold their next concert in Bangkok on June 1, followed by 17 other cities in Asia, Europe, America and, for the first time, Australia.

“We’ve never been to Australia, and so we’re looking forward to our performance in Sydney. And of course, the Staples Center in Los Angeles. Fans from Europe welcomed us so much last year, and so we’re curious to see how they will receive us this time, too,” said Shownu.

“It’s really difficult for someone to love someone else without seeing them,” said Minhyuk. “So we try not to make fans feel like they’re alone. We want them to feel like we’re always with them, and the way we do that is by communicating with them. I think that’s gotten us to where we are right now.”

“We hope the fans feel that we’re a group that doesn’t just force them to look at us at a show, but a group that makes them feel like they’re playing with us, too,” said Joohoney.