Super Junior-D&E indulge in some ‘Danger’: Donghae and Eunhyuk duo promises a masculine side sure to titillate fans

Super Junior-D&E indulge in some ‘Danger’: Donghae and Eunhyuk duo promises a masculine side sure to titillate fans 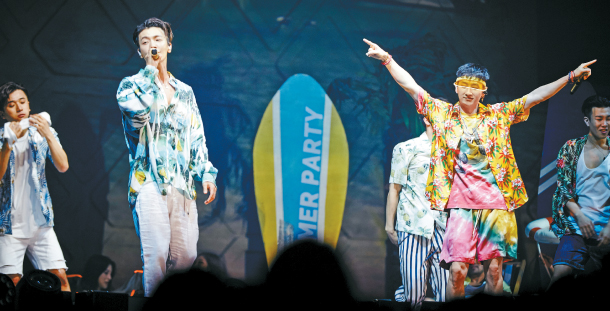 Super Junior-D&E held their concert series through the weekend at the Olympic Hall in southern Seoul. The duo, a subgroup of boy band Super Junior, also revealed the tracks from their new EP “Danger” prior to its official release today. [LABEL SJ]

Fourteen years into it, but just as fresh as the day they started: Super Junior-D&E, the subgroup of veteran boy band Super Junior consisting of members Donghae and Eunhyuk, wrapped up its first Korean solo concert series “The D&E” on Sunday at Olympic Park, southern Seoul. The weekend offered a double scoop of joy for fans as the duo revealed songs from their new seven-track EP “Danger” during the performance, before the album’s official release today.

“We’ve been thinking about the new album since last year,“ said Donghae. “And we decided that this time, we wanted to show you something very masculine, and show off our manly side.”

Eunhyuk added, “We’ve been telling you that we’ll be doing something masculine every time we bring new music out. But this is it. This one really is very masculine. We’re back as real men this time.”

“Danger” is the duo’s third EP outside of their regular work with the whole Super Junior team. The duo came together in 2011 with the dance track “Oppa, Oppa” and released its first official EP “The Beat Goes On” (2015) under the title Super Junior-D&E. Then came “’Bout You” last August.

The electro hip-hop track “Danger” is a departure from the past. The music video has a deep black-and-red theme that the members describe as “dangerous and sexy.”

“The black symbolizes the charisma and the red symbolizes our sexiness,” said Eunhyuk.

“I wanted to give you a good performance this time. Because we’ve done disco and hip-hop in the past, I thought about what I could show this time. And the idea for ‘Danger’ came to me, and I started writing the song,” said Donghae, who wrote four songs on the EP including the lead track. “The message we’re trying to get across is, if we pull the trigger, then just follow us and we will lead the way.”

Donghae came up with the idea of pulling the trigger when the image of racing horses came into his mind. “Just like racing horses, we’ve been running forward without looking sideways. So this time, we’re telling the fans to run with us. So there are a lot of dance moves in the song that are related to this message.”

While Donghae busied himself with producing new songs, Eunhyuk took over the staging of the concerts, as he did with the previous Super Junior concert, the “Super Show” series.

“This is the first concert [for Super Junior-D&E] to be held in Korea,” said Eunhyuk. “The two of us have done quite a lot of things together since 2011, but this is the first time for us to show all of this to fans in Korea. So I tried to put all of our history, our music and how we have matured into the three-hour show. The sections are divided into different colors, and we’ll be showing our diverse sides that go along with the colors.”

Veterans that they are, Donghae and Eunhyuk confessed that they’re still as nervous to go on stage as ever.

“We’ve literally held hundreds of concerts, and people ask me, ‘Couldn’t you put on a concert with your eyes closed?’” said Donghae. “Well, I could fall off the stage if I close my eyes at a concert (laughs). But I was so nervous yesterday. I fell short of breath at the opening concert yesterday because I was so anxious. But I feel better today.”

The full Super Junior crew will be back before the end of the year with new music, but the duo hopes that fans will be able to feel something different from just the two of them in Super Junior-D&E.

“I hope that you like all the different styles you can get from us,” said Donghae.