KB ramps up its biometric service

KB ramps up its biometric service 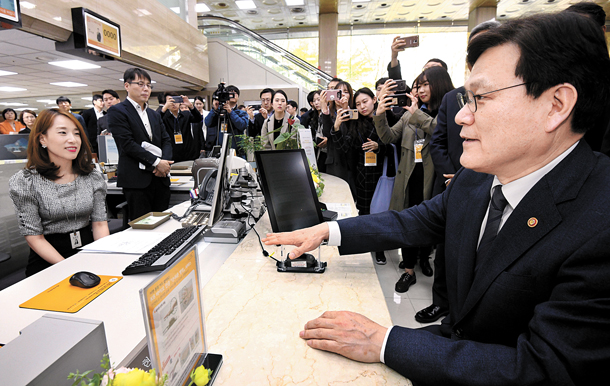 KB Kookmin Bank, Korea’s second largest bank by net profit, has expanded the use of biometric verification to a wider area of financial services as a part of its efforts to digitalize the transaction process at brick and mortar branches.

Its palm vein recognition system, introduced in May 2017, has only been used for self-identification in a limited range of services, but KB will add money withdrawal to the existing list.

“So far, customers were able to verify their identification with the palm vein system instead of using ID cards when, for instance, opening a new account,” said a spokesperson from KB Kookmin Bank.

“But they can also use the method when taking out money from their accounts,” the spokesperson said.

Transactions using the biometric service have been restricted because approval from the Financial Supervisory Service is needed before adoption.

The regulator passed an amendment in January.

The new service will eliminate the hassle of carrying ID cards or using passwords - all a customer needs to do is place their hand above the scanner.

The bank added that the recognition system works more quickly than ID cards or passwords.

The extended offering will be applied to 50 branches starting today and KB plans to extend it to all outlets by the second half of this year.

At a demonstration event on Friday, the bank addressed concerns related to identification theft.

“In KB’s palm vein authentication, we split the biometric information and send it to two institutions - KB Kookmin Bank and Korea Financial Telecommunications & Clearings Institute,” said a KB employee from the retail customer division. “So, it is hard to get access to information even if an unauthorized entity manages to gain data at one institution.”

KB also added that vein patterns are unique to individuals, which limits the possibility of an error. Financial Services Commission Chairman Choi Jong-ku attended the showcase event held at the headquarters of the bank in Yeouido, western Seoul, where he reiterated the importance of digitalization in the banking sector.