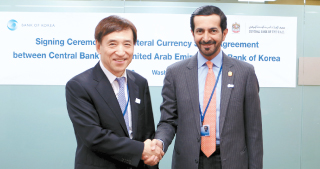 Bank of Korea Governor Lee Ju-yeol, left, shakes hands with Mubarak Al Mansoori, governor of the Central Bank of the UAE, on Saturday at the headquarters of International Monetary Fund in Washington. [BANK OF KOREA]

Korea and the United Arab Emirates (UAE) announced the renewal of a currency swap arrangement on Saturday in a bid to bolster trade without using dollars or other currencies.

The two parties first signed a currency exchange agreement in October 2013, but they failed to renew the initial deal after the end of the contract in 2016.

The central banks of the two countries “had discussed the renewal, but the agreement was delayed due to disagreements over technical issues,” the Bank of Korea wrote in a statement.

“Terms and details of the latest contract are unchanged from the previous agreement,” it said.

A cross currency swap allows two countries to exchange payments in one currency for an equivalent amount in the other to facilitate trade transactions and offer liquidity support to financial markets.

Bank of Korea Governor Lee Ju-yeol and Mubarak Al Mansoori, governor of the Central Bank of the UAE, signed the agreement in Washington.

Korea has currency swap arrangements worth around $132.8 billion.

It also has agreements with Switzerland, China and Canada and is a party to the Chiang Mai Initiative, a multilateral currency swap arrangement $38.4 billion in size.

The arrangement with Canada, agreed upon in 2017, has no time limits or ceilings on the total swap amount.

Japan unilaterally suspended talks on swap deal with Korea in 2017 over a statue symbolizing Korean women forced to work in brothels under Japanese colonial rule.

At the time, the Korean government expressed regret but made it clear that it had no plans to request reconsideration.