LPG: Fuel of the future or flash in the oil pan?

LPG: Fuel of the future or flash in the oil pan?

A liquefied petroleum gas (LPG) station in Seoul on March 19. The government revised safety and management laws on LPG, allowing ordinary people to purchase or covert to LPG vehicles from March 26. [YONHAP]

Kim Seok-hee, who operates a car repair business in western Seoul, has recently been swamped with calls from car owners looking to convert their vehicles to liquefied petroleum gas (LPG) systems.

“Compared to a month ago, I’m getting around four times more calls about installations,” said Kim. “I just had eight calls this morning!”

Noting the considerable difference in LPG and gasoline prices in Korea, Kim said that car owners are considering converting their engines to cut back on fuel prices, following the government’s decision to allow everybody to drive LPG vehicles on March 26.

The vehicles were previously only available to select groups such as war veterans, people with impairments and taxis due to the limited supply of LPG at the time the regulation was introduced.

Automakers have rushed to meet the demand. 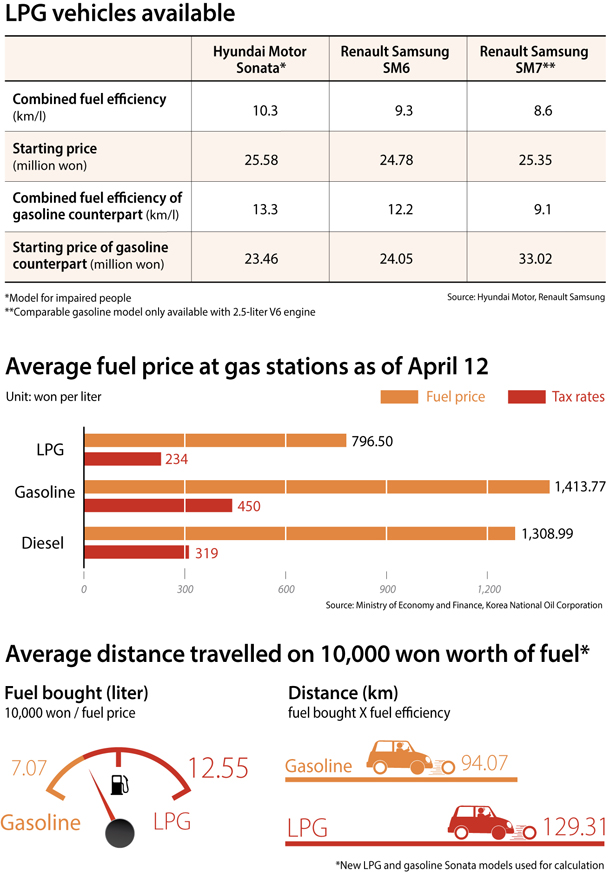 Renault Samsung Motors is releasing LPG models of its SM6 and SM7 sedans and QM6 SUVs, while Hyundai Motor is considering offering the LPG version of its popular Sonata sedan, currently only available to drivers with impairments, for general sale.

Renault Samsung Motors is also keeping prices low to attract drivers, with the LPG version of the SM6 costing up to 1.5 million won ($1,322) less than the gasoline version.

Despite the hype, consumers should stop to consider the bigger picture before deciding to take the leap.

Prior to the regulation change, LPG vehicles held a forbidden fruit status for ordinary penny-pinching drivers in Korea as the price of the fuel is far lower than others.

According to the Korea National Oil Corporation on April 12, the average price for vehicle-use LPG at gas stations was 796.50 won per liter ($2.65 per gallon), compared to gasoline at 1,413.77 won per liter and diesel at 1,308.99 won per liter. This disparity will only get bigger when tax cuts are lessened on May 7.

The fuel is so cheap that it offsets the low efficiency of LPG vehicles.

Despite the difference, 10,000 won worth of fuel for the LPG model will result in over 35 kilometers (21.7 miles) more on the road, or roughly the distance of a round trip from Seoul to Goyang, Gyeonggi, compared to its gasoline counterpart.

According to the Ministry of Trade, Industry and Energy, LPG vehicles produce three times fewer nitrogen oxide emissions than gasoline cars - and 93 times fewer than diesel cars. The government expects around 360 billion won ($316.9 million) to be saved in environmental costs in 2030 through the reduction in emissions, accounting for the increase in LPG vehicles by then.

The revision to the LPG business and safety law in March was largely motivated by a call to reduce fine dust emissions amid worsening levels of pollution in recent years.

LPG advocates also argue that practical worries surrounding the vehicles such as using trunk space to install fuel tanks or stuttering engine performance have also become a thing of the past.

“We now have donut-shaped LPG tanks placed in the spare tire space,” explained Kim. “The new LPG injection systems have also improved vehicle performance, while converted LPG cars can simply switch to gasoline if need be.”

Despite the apparent advantages of owning an LPG vehicle, it has its share of significant drawbacks.

Although LPG prices in Korea are cheaper than other fuel sources, its price competitiveness is largely rooted in the country’s fuel tax system.

“If taxes were the same, there wouldn’t exactly be a need to buy an LPG vehicle,” said Lee Ji-yeon, a senior analyst at Cape Investment and Securities.

With the affordability of LPG cars essentially boiling down to the difference in tax rates, an increase in the number of vehicles could result in a drop in tax revenue and naturally lead to discussions on changing tax rates.

A Trade Ministry report last year said the increase of LPG cars by easing regulations could reduce tax revenue by 300 billion won by 2030.

The government has argued that the environmental benefit balances out the potential problem.

Experts agree that taxes will remain low as a hike would contradict the government’s effort to promote cleaner fuel sources.

In another follow-up amendment to the LPG business and safety law that seeks better management of LPG supply, lawmakers expressed concerns over tax revenue through the wider adoption of the vehicles.

“If LPG vehicles are allowed to be sold to ordinary people with the current LPG tax rate, tax losses are expected to increase,” read the proposed revision submitted by Democratic Party lawmaker Lee Hoon and nine others on March 11. “If LPG restrictions are eased, it could lead to questions on the fairness of taxation compared to other fuels such as gasoline and diesel.”

More immediate concerns surrounding LPG also exist, considering the expected 40 percent increase in the number of the vehicles over the next decade.

There are currently only around 2,000 LPG stations in the country, just one-sixth of the total number of gas stations, leading to worries that there simply aren’t enough stations to fuel the vehicles.

The Korea LPG Industry Association has dismissed the claims, explaining that there is enough to meet demand.

“Compared to the total number of gas stations and gasoline vehicles, there are around twice as many LPG stations for LPG vehicles,” said a press officer for the association.

As of end of last year, there were around 20 million gasoline and diesel vehicles and 11,767 gas stations compared to two million LPG vehicles and 1,860 stations.

But accessibility is an issue.

Only 77 LPG stations are in Seoul, with none in the downtown area. Most are located on the outskirts of the capital city due to safety concerns.

Existing regulations on the high-pressure system limit LPG stations with a capacity of 10 tons to be built 24 meters away from buildings.

“The biggest issue is receiving a permit [for a new station], but it’s difficult as there are concerns over safety and opposition from residents near possible LPG station sites,” said the press officer.

The fuel source also faces competition from renewable energy, which is also being promoted by the government. That could hurt the industry, which has already been on a decline.

According to the Ministry of Land, Infrastructure and Transport, LPG vehicles accounted for 8.8 percent of the total number of cars last year, down from 12.8 percent in 2012.

“The LPG industry’s long-held wish passed the National Assembly, however, it is unclear whether it will be possible to recover profitability in the local market with increasing price competition and a change in the energy paradigm,” said Koo.