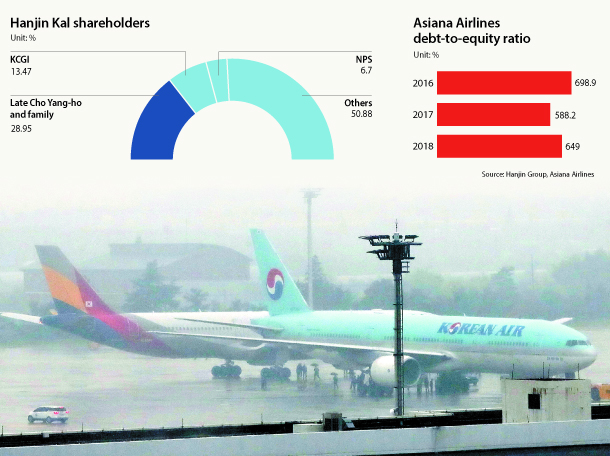 Control of Korea’s two major airlines is suddenly in doubt. One may be sold outright. The other could end up run by professional managers.

Cho Yang-ho’s death earlier this month brings into question his family’s ability to vote down challenges from other shareholders of Korean Air Lines, while Asiana Airlines may be sold out from under the family of Park Sam-koo as the carrier drowns in debt.

Cho Won-tae, Korean Air Lines president and son of Cho Yang-ho, has been expected to take over as leader of the carrier and of Hanjin Kal, the parent company of the airline. But major shareholders, the Korea Corporate Governance Improvement (KCGI) fund and the National Pension Service (NPS), may stand in the way.

With the debt of Asiana Airlines now at 649 percent of equity ― with about $1.5 billion due soon ― it is almost impossible to refinance unless the family that controls the company allows itself to be diluted down. A number of attempts have been made to convince KDB to make loans to the company to tide it over, but the bank is denying these requests.

Cho Won-tae is the only likely candidate to succeed his father, as his sisters have been involved in a number of scandals. Cho Hyun-ah, Cho Yang-ho’s eldest daughter, had to step down a vice president at Korean Air Lines after the infamous “nut rage” incident in 2014. Cho Hyun-min, the youngest daughter, was forced to resign as a Korean Air Lines executive director last year for throwing a cup of water at an employee of a subcontractor.

“Regardless of management capability, Cho Won-tae is the only child who is currently involved in management,” said a source from the industry. “And there aren’t many alternatives.”

If Cho Yang-ho’s entire stake is transferred to his family, the family may be able to maintain control of the board. But it will have to deal with the inheritance tax to gain control of all the shares.

With the tax rate for estates as high as 50 percent, the family could be facing a 200 billion won ($180 million) burden, if shares and other assets are considered. The family is expected to pay the tax with loans collateralized by stock, stock dividends and the disposal of assets.

With stock-collateralized loans, borrowers can usually get financing equal to half the value of the assets being pledged. Twenty-seven percent of the family’s shares are already being held as collateral.

The family could sell shares inherited, but that would reduce their ability to vote down challenges to their control of the board. Institutional shareholders, including KCGI, may not support the wishes of the Cho family.

The possibility has been raised of the family simply holding onto their board positions and allowing management to be taken over by professional outsiders.

“If the family disposes of inherited Hanjin Kal shares, they will be deprived of the management rights,” said researcher Park Kwang-rae from Shinhan Investment Corporation. “It’s possible to give up on inheritance after having grown tired of media attacks.”

The situation at Asiana Airlines isn’t any better.

The carrier has been facing liquidity troubles over the past few years, and Park Sam-koo lost his positions as CEO of Asiana and registered executive of Kumho Industrial, the airline’s controlling shareholder.

Park resigned from his positions March 28 following an accounting scandal at the airline. The company’s debt-to-equity ratio late last year stood at 649 percent. The debt the airline needs to pay this year totals 1.7 trillion won.

Park asked KDB for 500 billion won to help Asiana Airlines survive a financial crisis in return for all the family shares of Kumho Buslines as collateral for the loan. Kumho Buslines controls Kumho Industrial.

Park’s proposal showed his determination to normalize Asiana Airlines, according to insiders.

Asiana Airlines could also be sold, and a number of potential acquirers have been mention. Possible candidates are SK Group, CJ Group and the Shinsegae Group.