Living in the countryside as a farmer may be a better option than scrambling for a job in the city.

Of people who moved to the countryside to become farmers, over half are satisfied with their choice, according to a government report. Faced with high unemployment, people in their 30s to 40s are also finding new job opportunities in rural areas. 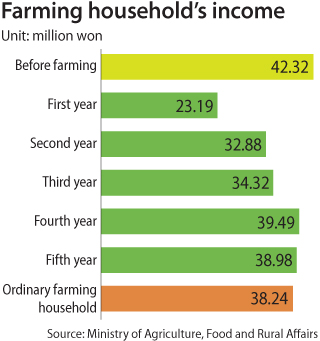 Song Sang-hee, a 40-year-old former marketer who worked in Seoul, returned to his hometown Jangsu, North Jeolla, to become a farmer four years ago. He lost money in his first year as he failed to manage harmful insects and weeds, although he grew vegetables with eco-friendly farming methods. His wife had to work at a restaurant, and Song also had to take a part-time job.

Since then, he has cultivated different plants: rare medicinal herbs. He began to use the internet for orders and used knowledge he gained from his agriculture-related college major. Orders from customers who care about their health began to rush in. He is currently preparing to launch a business that makes tea bags out of herbs.

Song’s case was a success story introduced by Ministry of Agriculture, Food and Rural Affairs on Sunday. While generations before chose to become farmers after retirement, recently, due to scarce job opportunities, people in their 30s to 40s are joining this trend. The total population of those who returned to rural areas and those who became farmers was 516,817 in 2017, according to Statistics Korea.

According to a 2018 survey on farmers who were once city dwellers, novices go through trials and errors like Song. The average family income before becoming a farmer was 42.32 million won ($37,363), and after a year, their income decreased to 23.19 million won. However, by the fourth year, their income increased to 39.49 million won, and to 38.98 million won in the fifth year, recovering up to 92 percent of the income earned before farming. The income earned in the fifth year outnumbers the average income of an ordinary farming household at 38.24 million won.

Woo Dal-young, 52, who grows chili and sesame in Jecheon, North Chungcheong, learned the basics through a farming association while working at a company in Seoul before he came to the countryside in 2016. Woo even practiced farming on leftover land in Gimpo, Gyeonggi. Since then, for a year he experienced the life of a farmer at a center that supports agricultural businesses and received training.

The average preparation period for households that go into farming is 27.5 months. Over half of the farmers went through a preparation time of one to three years. In addition, two-thirds of the farming families received farming education or completed an agricultural internship program. It was found that those who received education earned higher incomes from farming than those who did not receive any education.

Those who went back to the land gave various reasons for their decision, but the most popular was that they adore the natural environment, at 26.1 percent of respondents. Others replied they saw the potential of the agricultural industry, at 17.9 percent, while others felt doubts about city life, at 14.4 percent. The ratio of people who were satisfied with their life in the countryside was 60.5 percent, that of those who said it was O.K. was 32.5 percent, and 7 percent were unsatisfied. On whether they had good relationships with local residents, 76.9 percent said they have good relationships, and that of those who said they have bad relationships was only 2 percent.

“After moving to rural areas, 19.7 percent of farming families start farming within five years, and this means that there are as many farming households excluded from statistics as there are included,” said Lee Si-hye, a business and human resource development division director at the Ministry of Agriculture, Food and Rural Affairs. “In order for city dwellers to find new jobs in rural areas, we are going to expand our support.”