Asiana remembered as it is sold after 31 years

Asiana remembered as it is sold after 31 years

Thirty-one years and two months ago, Asiana Airlines was founded. Very soon, it could be history after its controlling shareholder said it would be selling off the debt-laden carrier. 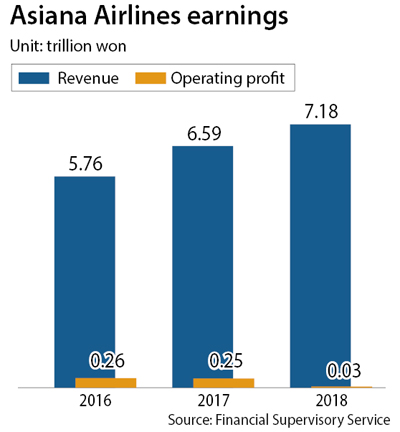 Asiana Airlines was formed in 1988, the year the Olympic Games were held in Seoul, as Seoul Air International.

The Chun Doo Hwan government in February 1988 approved the Kumho Group, as it was known at the time, to form the country’s second private airline. The market had been monopolized by Korean Air.

The Summer Games put Korea on the global map, but there was a shortage of flights to transport the visitors. In August 1988, Asiana inaugurated its first service and changed its name in December.

While the airline first operated with a single Boeing 737, it enjoyed the Golden Age of travel in the 1990s along with its competitor as the government lifted the overseas travel ban, and Koreans started going abroad en masse.

Asiana Airlines has had its fair share of trouble. One of its Boeing 737s crashed in Hwawon, South Jeolla, in 1993, killing more than half of the passengers. It also faced financial difficulties in 1997.

In July 2013, an Asiana 777 landed short of the runway at San Francisco International Airport, killing three. 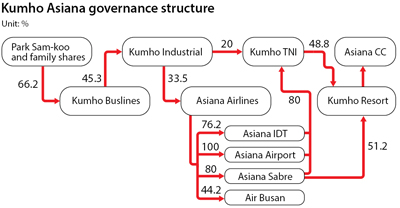 Asiana Airlines sought global standing by joining the Star Alliance in 2003. It was around this time that Park Sam-koo became the chairman of the then Kumho Group. Kumho Group expanded aggressively under the Kim Dae-jung and Roh Moo-hyun administrations.

While President Roh was not born in the Gyeongsang region rather than the Jeolla region, the party he inherited from predecessor Kim Dae-jung was a party of Jeolla, as Kim was born in South Jeolla.

In 2006, the Kumho Asiana Group acquired the Daewoo E&C construction company, and two years later, it bought Korea Express, a logistic company. The acquisition helped the group rise in ranks to become one of the country’s largest enterprises.

Kumho Asiana bought these companies without sufficient capital, and soon debt piled up. The global crisis in 2008 only made matters worse, and soon Kumho Asiana as a group was facing a liquidity crisis.

The acquisition spree was the beginning of the end.

In 2009, the group was forced to implement a workout, and management rights were assumed by Korea Development Bank (KDB). Daewoo E&C and Korea Express were sold.

Chairman Park in 2015 tried to regain the former glory by reacquiring Kumho Industrial in 2015, but his ambitions stalled as he failed to reacquire Kumho Tire.

Officials from the business community connect Park’s reckless acquisitions to today’s situation, where Kumho Asiana will now have to sell off Asiana Airlines.

“The reckless expansionary management created the liquidity crisis in Asiana Airlines,” said a business community official who requested anonymity. “It is Park’s management of resorting to old ways of expansion that has created the current situation.”

Since Asiana Airlines was first founded more than three decades ago, it has had trouble getting out of the red. It was only in 2016, after undertaking a large-scale restructuring, that it was able to record a 256.4 billion won operating profit on 5.76 trillion won of revenue.

Despite the situation faced today, many remember Asiana Airlines fondly.

“Asiana Airlines, while in second place to Korean Air, created a clean image with its slogan ‘Beautiful People’,” said an official in the airline industry who requested anonymity. “It was the first airliner in the world to ban inflight smoking on all routes.”

With the ‘Beautiful People’ slogan, the airline was famous for choosing campaign models who became leading celebrities in the Korean entertainment industry. Actress Park Joo-mi reached stardom after working as an Asiana campaign model between 1993 and 2000.

Actress Han Ga-in also made her debut by appearing in commercials for Asiana Airlines. Actress Lee Bo-young got her start with the company as well.

Once Kumho Asiana Group sells off the airline, it will be left with Kumho Buslines and Kumho Industrial. It will be half of what it was during its prime.