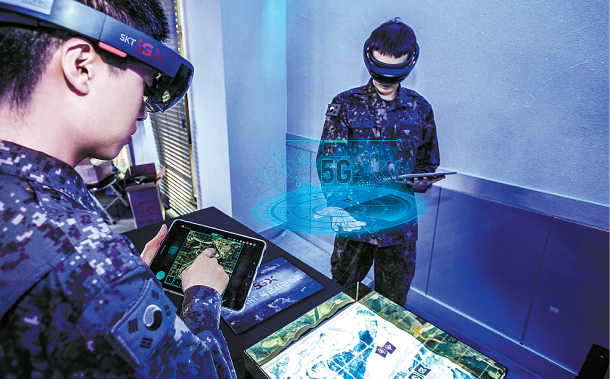 Cadets wear augmented-reality glasses and use 3-D images of maps to plan battle strategy. SK Telecom and the Korea Military Academy inked a partnership on Monday to establish 5G infrastructure at the academy’s Seoul campus in order to use virtual reality and augmented reality technologies in cadet training. [SK TELECOM]

With 5G, cadets will practice shooting under various scenarios offered in the virtual world, such as shooting in the dark and shooting moving targets. The mobile carrier said trainees will be able to feel the kick from shooting. Different ballistic curves for different bullet types will be programmed into the virtual battle to enable close-to-reality training.

Apart from the VR headgear, the cadets wear vests and other equipment so that they can feel the recoil from shooting as well as vibrations to indicate they have been shot.

“It’s easier to think of the training as a military version of the movie ‘Ready Player One,’” SK Telecom said in statement.

While the academy set up its own virtual reality training program last year, only about 10 people were able to participate at once due to slow data loading speeds and the unstable network. However, as 5G boasts low latency and is roughly 20 times faster than the current 4G LTE, in theory, roughly 200 cadets will be able to fight in virtual battlefields together without feeling a lag in the virtual reality videos.

Augmented reality technology will be used for commanders to draft battle strategies by using a three-dimensional image of a map right in front of their eyes.

The academy said that it also plans to make the overall education environment smarter by offering tablet PCs and wearable devices to cadets.

Wearable devices and virtual AI assistants will help cadets maintain health by regularly analyzing their health data. With tablets, cadets will be able to do homework and participate in quizzes.

“Nurturing cadets for the country’s future military will [enable] our academy [to] become a first mover by establishing 5G infrastructure,” said Chung Jin-kyung, superintendent of the Korea Military Academy.

SK Telecom and the academy will cooperate in developing 5G and digital technologies, including quantum cryptography, drones and Internet of Things, by cohosting seminars and sharing know-how under the partnership inked Monday. Quantum cryptography could increase security in today’s internet-connected world.