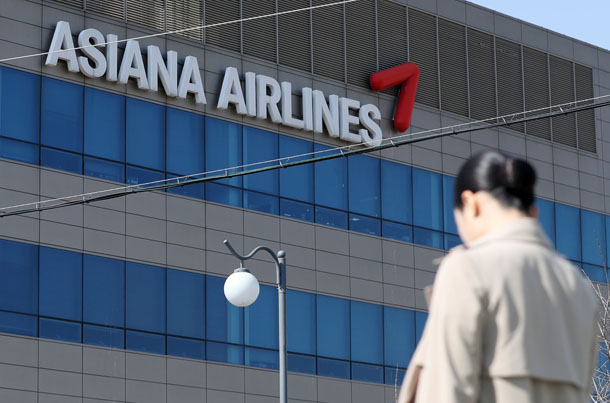 An Asiana Airlines employee walks toward the airline’s headquarters in Gangseo District, western Seoul, on Monday. Kumho Asiana Group on Monday decided to sell Asiana Airlines to save the group. [NEWS1]

Kumho Asiana Group will sell its crown jewel Asiana Airlines in an attempt to keep itself afloat and the cash-strapped airline from crashing into oblivion.

The board of Kumho Industrial said Monday it would sell the airline in return for financial support from its creditors for Kumho Asiana.

“We have been mulling ways to normalize Asiana Airlines’ business [and concluded] selling the airline is the [only] way for the group and Asiana Airlines to regain market trust,” said a spokesperson for Kumho Asiana. “We took into consideration the future of Asiana Airlines, which boasts 30 years of history, as well as the future of its 10,000 employees.”

Conglomerates involved in retail like Aekyung Industry, which owns Jeju Air, CJ Group and Shinsegae Group are also seen as possible bidders as they could use the airline to expand their distribution networks.

Selling Asiana Airlines would reduce Kumho Asiana to a small or medium-sized company. Without the airline, which has 6.88 trillion won in assets, the group’s total assets, currently 11.45 trillion won, would shrink to 4 to 5 trillion won.

This could push down the group’s ranking to below 60. According to the Fair Trade Commission, Eugene Group and Hansol Group ranked 59th and 60th in terms of assets with their total assets standing at 5.3 trillion won and 5.1 trillion won respectively.