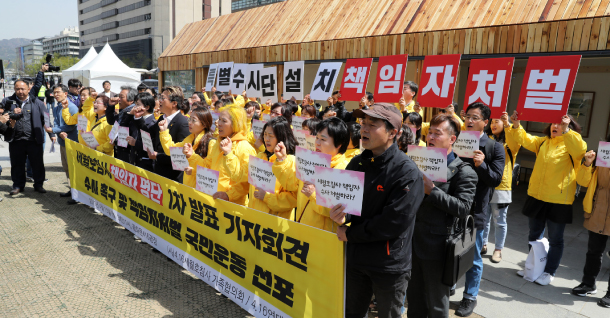 Two groups, the 4.16 Sewol Families for Truth and A Safer Society and the 4.16 Alliance, hold a press conference on Monday at Gwanghwamun Square in central Seoul to disclose a list of 17 figures of the Park Geun-hye administration they accused of failing to prevent the disaster and covering up the truth behind it. [YONHAP]

On the eve of the fifth anniversary of the Sewol ferry disaster, civic groups representing victims’ families on Monday demanded that key figures in the previous administration be punished for their alleged responsibility in the accident.

The two groups, the 4.16 Sewol Families for Truth and A Safer Society and the 4.16 Alliance, held a press conference at Gwanghwamun Square in central Seoul in which they disclosed a list of 17 figures of the Park Geun-hye administration they accused of failing to prevent the disaster and covering up the truth behind it.

Former President Park Geun-hye, currently in detention for her alleged role in a massive corruption and power abuse scandal, was the most prominent figure on the list, primarily for her alleged failure to address the crisis for almost seven hours after the Sewol began sinking in the morning of April 16, 2014.

In total, 304 passengers and crew members - most of them students of Danwon High School in Ansan, Gyeonggi - drowned that day in one of the deadliest accidents in Korean history.

In the aftermath of the crisis, Park and her administration received heavy public criticism for their sluggish response and botched rescue operation.

The years that followed brought on even more controversy as it was later discovered that the Park Blue House had tried to meddle with several fact-finding investigations on the accident and allegedly conducted a cover-up to evade responsibility.

The Sewol victims’ families played an important role in rallying the public to demand Park’s ouster in 2017, but the Constitutional Court that ratified her removal did not find Park’s handling of the accident as grounds for impeachment. No government figures were ever punished for the case, save for one low-ranking Coast Guard officer.

The civic groups on Friday said former Blue House Chief of Staff Kim Ki-choon; Woo Byung-woo, former senior presidential secretary for civil affairs, and three other presidential aides were responsible, along with Park, for ordering interference into the post-incident inquiries that took place in the following years.

Also included on the list was former Justice Minister Hwang Kyo-ahn, now the chairman of the main opposition Liberty Korea Party (LKP). The organizations claimed Hwang put pressure on prosecutors investigating the disaster to remove the charge of involuntary manslaughter from key members in the administration.

Then-Oceans Minister Lee Joo-young, now an LKP lawmaker, and the former chiefs of the national and Mokpo coast guards were also named.

Two commanders of the now-disbanded Defense Security Command, an intelligence unit of the military, were also accused of ordering illegal surveillance of victims’ families for their alleged antigovernment activities.

“In order to reveal how much pain the Sewol ferry disaster inflicted on the people and begin a healing process, the ones responsible must be re-investigated in full and punished,” said Jang Hoon, one of the groups’ leaders and the father of one of the young victims. One of the organizations said it would begin a public movement to file a criminal report against the accused figures with current law enforcement authorities.

A petition on the Blue House’s website calling for a complete reinvestigation of the Sewol accident received over 126,000 signatures as of Monday, while the ruling Democratic Party (DP) also provided political support to the case, promising to get to the bottom of the accident.

A total of 39 lawmakers of the DP on Monday released a statement at the National Assembly demanding that a prosecutorial investigation be opened into the case, singling out Hwang Kyo-ahn for his alleged attempts to threaten past Sewol investigators with demotions while he served as justice minister.