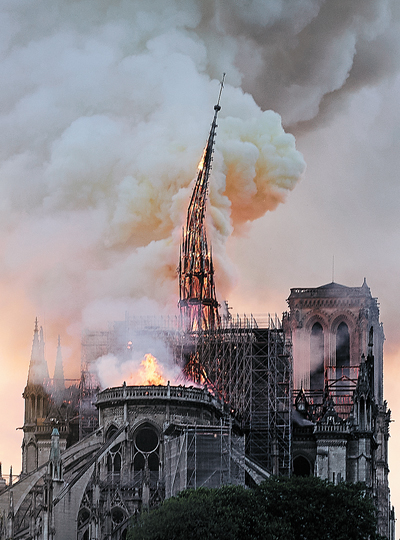 Flames and smoke rise as the spire on Notre Dame cathedral collapses in Paris on Monday. Korea expressed regret Tuesday over the massive fire at the cathedral at the heart of Paris and announced plans to conduct emergency inspections of local cultural assets.

“On behalf of the Korean government, the Cultural Heritage Administration (CHA) expresses deep regret over the fire at the Notre Dame Cathedral,” the agency said in a press release. “Korea has nearly suffered a loss of precious cultural property due to the fire at Sungnyemun Gate.”

In 2008, the wooden portion of the gate, designated as a National Treasure of South Korea, was damaged by arson, with restoration work completed five years later. The CHA said it asked provincial governments to check fire protection systems at wooden buildings and other cultural assets. On-site inspections of palaces, tombs and temples that are directly managed by the CHA are also under way.

Meanwhile, the Korean Catholic community offered words of consolation and promised solidarity with the people of France. “I have been in shock and deep grief since I heard the news about the fire at Notre Dame Cathedral last night,” Cardinal Andrew Yeom Soo-jung said in a message. “We share the pain and grief of Catholics in France and people in Paris.” [AP/YONHAP]