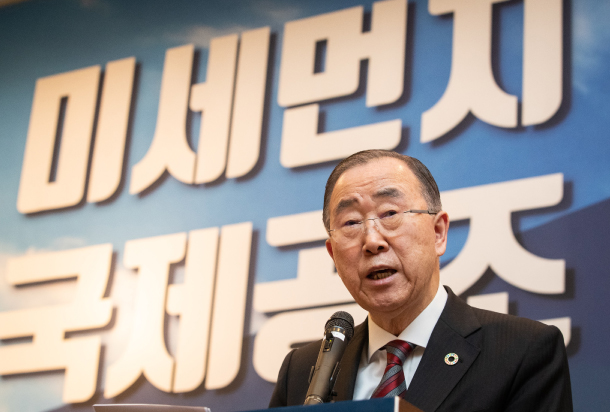 Former United Nations Secretary General Ban Ki-moon, chair of a new national fine dust agency in Korea, makes a keynote address Tuesday during a seminar on fine dust pollution at the office of the Federation of Korean Industries in Yeouido, western Seoul. [NEWS1]

Former United Nations Secretary General Ban Ki-moon said Korea should not get into a blame game with China over its fine dust pollution problem.

Last month, Ban accepted President Moon Jae-in’s offer to head a national agency to organize long-term cooperation on a global level to combat the pollution. The government had been criticized for failing to confront China about the dust it generates that ends up in Korea.

He said both had agreed on the need of global cooperation to tackle fine dust pollution.

“I promised that during my time heading the agency, we will not engage in a blame game,” said Ban at a fine dust conference hosted by the Federation of Korean Industries Tuesday.

“One thing I’ve learned after the trip is that we, too, should find [internal] ways to solve the problem in order to embark on serious discussions with neighboring countries,” Ban said. “Only if we make our best efforts to reduce fine dust can we ask for cooperation from overseas - that’s the only way to make our request persuasive.”

Ban called for more scientific research to define the factors that create Korea’s pollution - where the fine dust is from and how much is produced. Objective data is critical to convince other countries, he said.

The national fine dust agency led by Ban will have members from the government, private businesses, academia and ordinary citizens.

Environmental experts at the conference said global cooperation was a must as the fine dust crisis in Korea has overseas sources. One long-term solution would be like the Paris climate change agreement, they said.

China has rebutted claims that it is responsible for Korea’s fine dust pollution problem. One of its arguments is that it has been reducing levels of fine dust in recent years.

Cho Seok-yeon, a professor at Inha University’s Department of Environmental Engineering, pointed out that levels of fine dust measured in places of origin are not necessarily reflective of the effect their pollution can have on neighboring countries.

Cho said data shows that the increase in fine dust on the Korean Peninsula was greater in western regions like Seoul - closer to China - while in southeast regions like Busan the growth was slower.