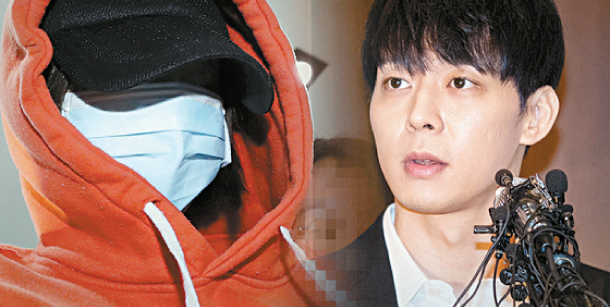 Police raided the home of singer Park Yu-chun on Tuesday as a part of an investigation into whether the singer took drugs along with dairy heiress Hwang Ha-na.

According to the police, 11 officers searched Park’s residence in Hanam, Gyeonggi, for three hours beginning at 9 a.m., and also collected hair and body fluid specimens necessary for drug testing.

The list of items confiscated by the police includes Park’s phone and credit card.

Park is said to have been staying in his house when the search took place.

On April 10, Park met with the press to deny allegations that he had taken drugs along with Hwang, his former fiance. At the press conference, he said that he had only taken medication for his depression and anxiety disorder.

During police questioning, Hwang claimed that she had done drugs with Park.

He claimed that Hwang’s account could not be true because they broke up early last year, but police found surveillance camera footage of Park entering Hwang’s residence early this year.

He appointed lawyer Kwon Chang-bum as his attorney on Monday, and will appear at the Gyeonggi Southern District Police Agency for questioning today at 10 a.m.