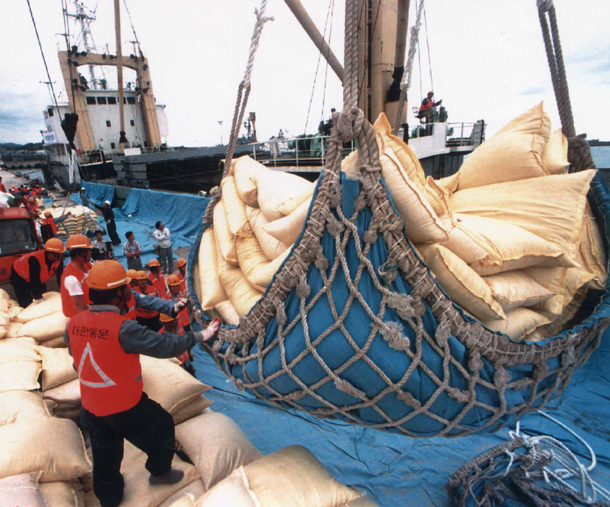 CHUNG HYO-SIK
The author is a Washington correspondent of the JoongAng Ilbo.

Last week, South Korean President Moon Jae-in was rebuked by both U.S. President Trump and North Korean leader Kim Jong-un as he tried to facilitate a third North Korea-U.S. summit. President Trump said that if the third meeting is rushed, the right deal cannot be made. Kim rudely said that President Moon should not meddle as a mediator. But a bigger problem is that Korea does not have independent leverage to compel the two stubborn leaders to the table.

The only card that President Moon can use now is humanitarian assistance for North Korea that includes food. At the South-U.S. summit on April 11, Trump said that it was not the right time to reopen the Kaesong Industrial Complex and Mount Kumgang tourism but allowed humanitarian assistance. As Korea and the United States draft details through a working-group consultation, there is a room for an inter-Korean summit and working-level denuclearization talks.

The biggest part of Korea’s assistance to the North has been rice. From 2000 to 2007, during the Kim Dae-jung and Roh Moo-hyun administrations, 400,000 to 500,000 tons of rice were sent every year. Rice aid was halted in 2006 when North Korea conducted the first nuclear test. Rice was provided directly as an inter-government loan to improve inter-Korean relations, and it was worth 100 to 179.2 billion won in 2005.

In 2008, the Lee Myung-bak administration advocated “denuclearization opening 3000” as its North Korea policy, and North Korea refused talks, effectively ending the rice aid. The last time that the Korean government sent rice to the North was the 5,000 tons of emergency relief at the time of the floods in 2010. Europe and most other nations reduced the size of food aid out of fatigue after the nuclear missile testing in 2016. At this juncture, North Korean Ambassador to the UN Kim Sung delivered an emergency request for food assistance to the United Nations right before the Hanoi summit. He pleaded that despite efforts, North Korea was short 1.48 million tons of food this year. It seems to be the right time for the government to consider.

The basic premise for resuming rice aid is that North Korea should not treat it like a gift as it had before. To send rice using taxpayer money, President Moon needs to successfully argue that Kim will agree to denuclearization and a roadmap. As Kim said that he has made a “strategic decision,” he has no reason not to agree to the roadmap. It is the minimum needed to settle for his small deal of “easing Yongbyon sanctions.” As U.S. presidential campaigns pick up steam in the second half of this year, not much time is left for negotiation.