Kim Jae-chul, founder and chairman of the Dongwon Group, offered his resignation Tuesday, paving the way for the next generation to assume leadership of the conglomerate.

The voluntary departure of the 84 year-old chief, announced during the group’s 50th anniversary ceremony, is a rare case in which a chaebol leader voluntarily steps down. 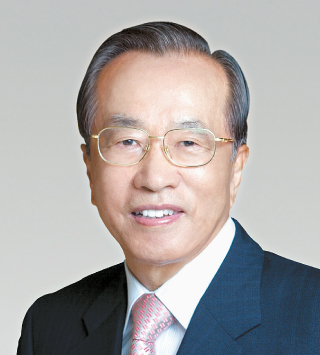 “I’d like to step down from the chairman position and back everyone, counting on your achievement,” he said during a speech at the event.

The group said that Kim will devote his life to contributing to society.

He will act as an advisor to the company, if and when needed.

As for the future leadership, Dongwon said that Kim Nam-jung, second son of the patriarch and vice chairman of the group, will manage the group.

“Broadly, corporate management won’t change that much,” said a spokesperson at Dongwon Group. “Dongwon Enterprise, Dongwon’s holding unit, will devise a broad corporate strategy, each affiliate will be led by the CEOs of the companies while vice chairman Kim Nam-jung will head management.”

In the ceremony, Kim called for the need to create value and work with integrity.

“The founding spirit of Dongwon was to realize social justice, and today’s vision is to create new value,” he said.

Although the announcement came out of the blue, the group has reorganized the corporate structure to facilitate the transition.

In 2002, Dongwon Industries, a deep-sea fishery company, split off its financial operations and put them in a newly-formed holding company. At the time, the company also separated the fisheries division.

Following the split, Dongwon Group was divided into two major operations: a financial sub-group, run by Kim Nam-koo, the eldest son, and a food and beverage division, managed by Kim Nam-jung.

The business started with three workers and one fishing vessel. It has grown into a major conglomerate, with interests in a wide range of businesses, including seafood distribution, food services, construction, finance and packaging.

The production of canned tuna, which began in 1982, made it a household name in Korea.

It has sold more than 6.2 billion cans.