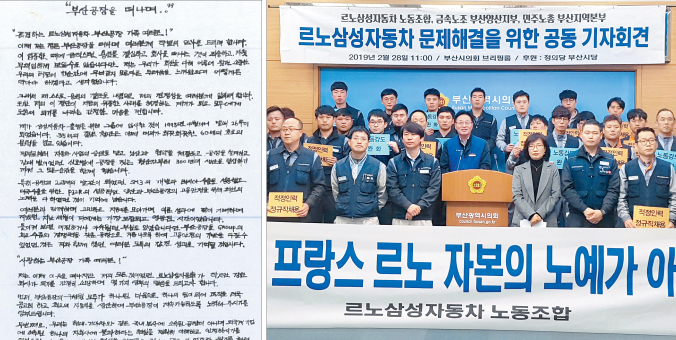 In the letter, entitled “leaving the Busan factory” and delivered last Friday, Lee said that continuing the labor dispute would “critically” damage the automaker’s operations. The dispute has gone on for seven months with no visible progress.

“The conflict between the labor union and the company must not continue,” Lee wrote. “If the unstable situation at the Busan factory continues, this would cause serious damage to ourselves and existence of the company.”

“I urge you to make a wise decision,” he added. Lee resigned from his position Friday claiming responsibility of the long wage dispute.

As of Monday, the Busan-based automaker’s labor union has gone on 58 strikes for total of 234 hours since last October. The dispute continued well past the March 8 deadline set for the conclusion of negotiations.

The union has called for the company to follow the minimum wage law, claiming that the required rate is not being paid. It also demanded management improve working conditions, and has said that mismanagement led to difficulties and mass layoffs.

In the 25th round of negotiations last week, the union asked for the right to participate in the human resources decision-making process.

The company has emphasized that cost increases could harm its competitiveness. Jose-Vicente De Los Mozos, executive vice president of manufacturing and supply chain for the automaker’s parent company, Renault Group, visited the plant earlier this year and said costs are too high.

“Workers at the Busan factory are paid most competitively among all workers within the Renault Group,” an automaker spokesperson said Tuesday. “We offered to pay some amount of money in place of raising wages, but the union rejected the offer.”

As the operating rate for the Busan factory fell to 20 percent below normal due to continuing strikes, Renault Samsung Motors suffered around 265.6 billion won ($233.6 million) in losses as a result of the strikes as of Monday. The loss is projected to be greater when factoring in the recent reduction of consignment orders from Nissan Motor for this year.

The Japanese automaker told Renault Samsung Motors late last month that it will reduce its orders for the Rogue SUV this year from 100,000 units to 60,000 units. As Rogue production falls, the Busan-based automaker’s total annual production is expected to be lower than 200,000 units.

The Rogue accounted for nearly half of the Korean automaker’s total sales of 227,577 units last year.

Stoppages are forecast to continue, as unionized workers at the Busan factory announced Thursday they will go on a so-called premium vacation for two days starting April 29 and for another two days from May 2. During these actions, workers use their extra days off.

According to the automaker, 54 percent of union members took part in the walkout Monday. The union instructed its members to either participate in the strike or go home.

The dispute could worsen as the recent audit showed that Renault Samsung Motors paid 70 percent of net profit in dividends last year.

According to recent financials, the company’s net profit in 2018 fell by 30 percent to 221.8 billion won, but dividend payments remained the same. The automaker paid 155.3 billion won as dividends, transferring 124.1 billion won to the parent company, which owns 79.9 percent of the automaker.

Critics say that the parent group is taking too much, even though it already profited enough to offset the price it paid to acquire the Korean affiliate in 2000. Renault Group invested 615 billion won in acquiring the then-Samsung Motors and received a total of 618 billion won in dividend payouts from 2007 to 2017.

The automaker, however, say it is simply following company rules. Renault Group mandates its affiliates pay 100 percent of net profits in dividends, but Renault Samsung Motors is granted a special exception to the rule as it is already under pressure from ongoing labor disputes and low sales.

Some industry sources speculate Renault Group could withdraw from Korea due to low sales and labor troubles. The automaker sold 12,796 vehicles last month, down 49 percent from the same period last year.