Yet another first for BTS: seven K-pop Pop! dolls

Yet another first for BTS: seven K-pop Pop! dolls 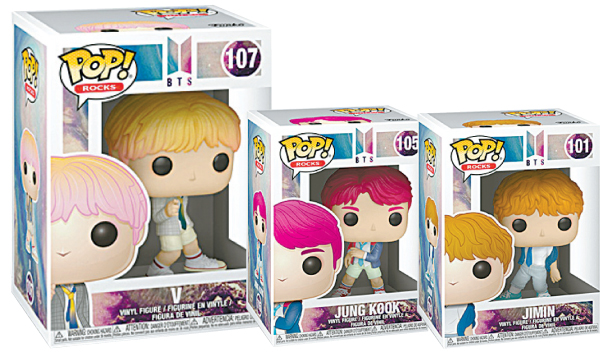 Sales will start Thursday, less than a week since the boy band unveiled its “Map of the Soul: Persona” album, on Friday.

Emart’s collaboration with Funko is part of the company’s effort to attract more customers to offline stores.

Sales of figurines at Electro Mart, Emart’s electronics chain, grew 75.8 percent last year, and 32.1 percent in the first quarter of this year.

“We are making an effort to showcase a variety of unique items that consumers want, and BTS Pop! dolls are part of that effort,” said a spokesperson for Emart.

“We will try to satisfy offline consumers by continuously developing items that have stories.”

BTS, of “Fake Love,” “DNA” and “Idol” fame, is known for delivering stories through music.

BTS is the first Korean boy band featured by Funko, which is known for figurines with big heads and big eyes atop small bodies. Funko has manufactured figurines based on actors, sports stars, singers and politicians.

Pop! dolls based on the Beatles, Metallica and Justin Bieber have been created.