This year not only marks the 100th anniversary of the March 1 Independence Movement and the establishment of the provisional government of the Republic of Korea, but also 100 years since the death of Simjeon An Jung-sik (1861-1919), a great master of modern Korean calligraphy and painting. An, according to Kim Seung-ik, a researcher at the National Museum of Korea who has been studying Korean calligraphy and paintings of the late Joseon Dynasty (1392-1910), is one of many Korean painters who worked as an artist during the turbulent time when Korea was being colonized.

“It was a chaotic age when the East and the West, and the old and the new, also coexisted,” Kim said. “Those artists, including An, made an effort to maintain our culture and national identity through their artwork.”

An’s “Spring Dawn at Mount Baegak” (1915) clearly demonstrates this. This painting is a set of works depicting summer and fall on Mount Baegak in central Seoul and Gyeongbok Palace, which sits in front of the mountain. However, when this painting was painted in 1915, many of the buildings in Gyeongbok Palace had been disposed of and removed by the Japanese and new western-style buildings had been erected.

“An did not paint Gyeongbok Palace as it looked during the time,” said Kim, “but used his memory and pictures from the past to bring back the old Gyeongbok Palace before the Japanese changed it into an exhibition hall. Such paintings allow us to witness the spirit of resistance of the artists who worked during this period of transition.”

That is why the National Museum of Korea has organized the “Modern Transitions in Korean Calligraphy and Painting” exhibition at its special exhibition gallery in central Seoul, which kicked off on April 23 and will run through June 2. There are 100 artworks on display specifically picked to commemorate the 100th anniversary of the death of An, says Bae Ki-dong, the director general of the museum.

The exhibition is divided into six sections. It starts off as visitors walk through a “digital time tunnel,” describes Kim, “which takes visitors to 100 years ago using lights, sounds and digital media.”

The first section sheds light on the “New Generation of Korean Calligraphy and Painting.” Although the exhibit focuses on works created by An, Kim says there were many other artists who also worked alongside An as Joseon was going through changes after opening its ports in 1876. These young elites became the leading painters of the Korean art scene. That is why the first painting on display in the first section of the exhibit is not of An but Gang Jin-hui (1851-1919)’s “Rising Sun and Pine Tree” (1888).

The second section, “The Brush of Enlightenment,” includes illustration works An created with Oh Se-chang (1864-1953) for magazines and educational books. This was the time when the press printing was first introduced in Joseon, which attracted modern artists like An. He began to foster students as well, which included Ko Hui-dong (1886-1965) and Yi Do-yeong (1884-1934).

The Korea-Japan Annexation of 1910 forced many government officials, intellectuals and artists to stand at a crossroads. This is when artists like Oh began compiling history of Korean calligraphy and painting while seeking ways for independence, while artists Kim Jin-woo and Lee Hoe-yeong showed their resistance through paintings. Their works can be witnessed in the third “The Art of Resistance and Seclusion” section. 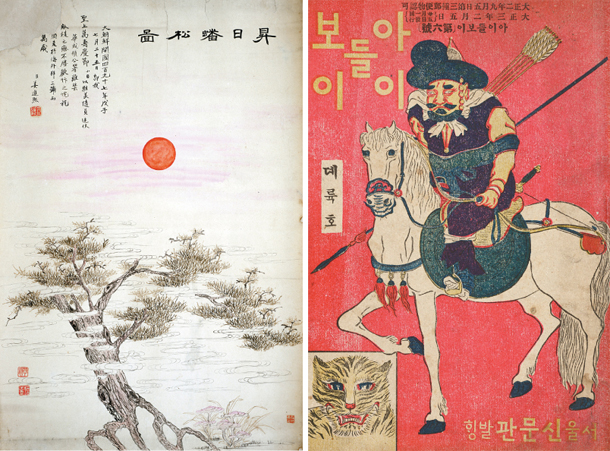 In the “Gatherings and Popularization of Art” section, visitors can see how the modern Korean art scene came to a turning point around the 1910s. The Association of Calligraphy and Painting was established in 1911 and produced many young painters and calligraphers. The Society of Painters and Calligraphers was also formed in 1918, which provided foundations for the popularization of art.

In the final “Challenges and Seeking of New Ways” section, paintings from after the 1920s are displayed. At the time, artists confronted a different challenge, as painters and calligraphers were seeking changes in accordance with a new era.

“It’s the first time in 39 years that the museum organized a calligraphy and painting exhibition,” Bae said.