The Avengers make a return to Seoul: Ahead of ‘Endgame,’ Marvel stars still aren’t sure what’s in store

The Avengers make a return to Seoul: Ahead of ‘Endgame,’ Marvel stars still aren’t sure what’s in store 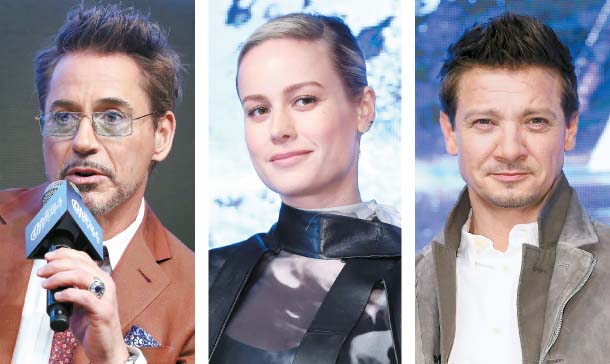 From left, Robert Downey Jr, Brie Larson and Jeremy Renner at the Asia press conference held in Seoul for the upcoming “Avengers: The Endgame,” which is scheduled to premiere on April 24. [YONHAP, NEWS1]

The long wait for the “Avengers: Endgame” has nearly come to an end.

With only a few days left until the highly-anticipated follow-up to last year’s “Avengers: Infinity War” hits local theaters, some of the film’s stars, producers and directors visited the Four Seasons Hotel in central Seoul for their Asia press conference. Stars Brie Larson, Robert Downey Jr., and Jeremy Renner were joined by producers Kevin Feige, Trinh Tran, and co-directors Anthony and Joe Russo.

The studio chose to invite journalists from all over Asia to meet the Avengers in Seoul thanks to the success of Marvel films in Korea. 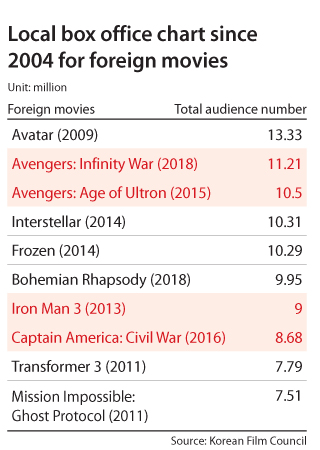 As proven by statistics provided by the Korean Film Council, four of the top 10 best-selling foreign films in the domestic market since 2004 are Marvel films, with “Avengers: Infinity War” second only to Avatar (2009). “Avengers: Age of Ultron” (2015) comes in at third while “Iron Man 3” (2013) and “Captain America: Civil War” stand side-by-side at seventh and eighth.

The anticipation and excitement for the series’ grand finale is almost palpable after the shocking ending of “Infinity War.”

“We rarely have a moment in movies where the bad guy wins,” Joe Russo said. “But unfortunately in life, there are many moments that we have to suffer like that.” He explained that telling a story where the bad guy wins was difficult, but still an important and rare opportunity in cinema which he thought was emotionally cathartic.

Not much about the film was revealed at the event except for the film’s duration, which is three hours and two minutes long.

The Russo brothers are famous for preventing any details about their films from leaking to avoid any spoilers coming out before the film hits theaters, which is why none of the film’s stars have seen the entire film yet.

That’s probably why theories from fans are becoming more wild than ever, which Renner says that he’s thankful for. “I just love that people are really that invested in the emotions and the characters in the decade of the movies that have come out. I am proud of being part of it.”

Robert Downey Jr. shared what he thought was the best scenario he’s heard so far. “My favorite,” Robert said, “is that Antman goes up Thanos’ butt and makes himself big.” 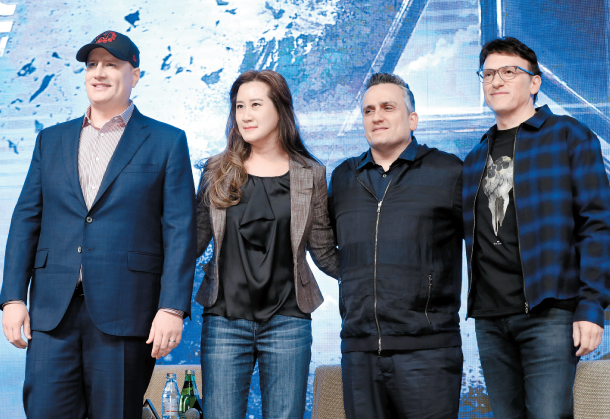 Brie Larson says she sincerely has no idea how the film turns out even though she shot her parts in the finale before she shot her own movie, “Captain Marvel.” Although she doesn’t know how she will fit exactly into the movie, she said that her character Carol has taught her so much and has influenced her life.

“[Playing Carol] changed my brain, changed the way I carried myself and strengthened my voice,” she said. “In a way, she is the symbolism, a representation of the importance of female stories and female journey, but she’s also for everyone. It’s about equality at the end of the day.”

Fans of the series are already aware of the ending of the film. Ultimately, Thanos will be defeated by the Avengers. The big question lies in how that will be done.

That naturally leads to a burning question: Would the remaining survivors be able to bring everyone back from Thanos’ snap?