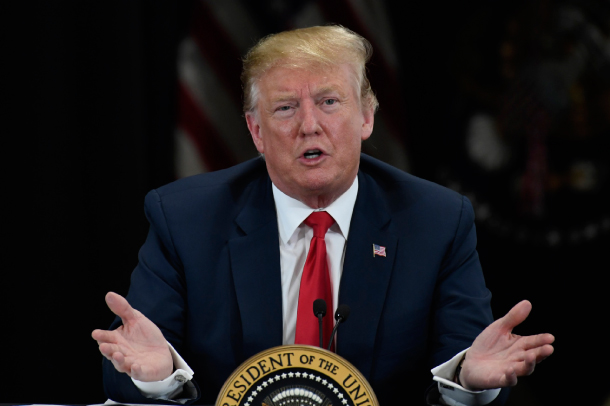 “I don’t want it to move fast,” Trump said on negotiations with North Korea while speaking in Burnsville, Minnesota. “It doesn’t have to move fast. Right now it’s moving along just perfectly.”

However, Trump added that while he has “a good relationship” with North Korean leader Kim Jong-un and that there are “a lot of constructive things going on,” he had no intention of loosening sanctions on Pyongyang. “Sanctions are on,” he said.

Trump’s remarks come after South Korean President Moon Jae-in visited him last Thursday to discuss the way forward with North Korea after the second North Korea-U.S. summit in February ended without a deal. Trump said in that summit that he is open to a third summit with Kim. Trump also said they were discussing “certain” humanitarian assistance to the North, such as South Korea providing food aid, saying, “You have to be okay with that.”

Trump wrote in a tweet Saturday that “a third Summit would be good in that we fully understand where we each stand.”

After walking away from the summit in Hanoi, Vietnam, Trump indicated he was willing to take time to reach a “proper deal” for North Korea’s complete denuclearization.

In turn, Kim last Friday told his Supreme People’s Assembly, the North’s rubber stamp legislature, that he is also open to a third summit with Trump, but will be awaiting a “bold decision from the United States with patience until the end of this year.” Kim downplayed North Korea’s obsession with sanctions relief, adding it will open a path to economic prosperity through its own means.

U.S. Secretary of State Mike Pompeo said Monday in Texas, “We’re not home yet, but I pray that one day that President Trump gets to announce that we’re removing the sanctions regime from North Korea.”

Pompeo, in a lecture at Texas A&M University, elaborated, “I would love nothing more than to lift the sanctions on North Korea” because it would indicate the successful denuclearization of North Korea and would be a “glorious thing.”

This would signify, he said, that “North Korea no longer had a nuclear weapons program or a weapons of mass destruction program” and “the opportunity to verify that that was the case, so we knew we weren’t taking anyone’s word for that.”

Earlier that day, Pompeo told reporters in Dallas that he had seen Kim Jong-un’s recent statement on a third North-U.S. summit, adding, “I appreciate that.”

He said there are “lots of conversations taking place” and that “President Trump is determined to move forward diplomatically.”

The U.S. team is working with the North Koreans, Pompeo said, “to chart a path forward so that we can get there.” Pompeo continued that while Kim “said he wanted it done by the end of the year,” he would “love to see that done sooner,” indicating the possibility of a third summit within the year.

Trump is running for re-election to the U.S. presidency in 2020.

“Kim Jong-un’s remarks at the Supreme People’s Assembly were an effort to rebut domestic and international perceptions that North Korea seeking sanctions relief was a sign of weakness,” said Leif-Eric Easley, an associate professor of international studies at Ewha Womans University. “On the other hand, military restraint in commemorating April 15 suggests that Kim does not feel it necessary to make a provocation to look tough after the ‘no-deal summit’ in Hanoi.”

He added, “This leaves room for Moon’s engagement efforts,” but said that the Moon-Trump summit last week “did not provide a green light for resuming inter-Korean projects” such as resuming operation of the Kaesong Industrial Complex or Mount Kumgang tours, “which seem to be Kim’s price for making a promised visit to Seoul.”

Kim is reported to be planning his first summit with Russian President Vladimir Putin as early as next week. Putin is set to attend a forum on China’s “One Belt, One Road” initiative held in Beijing on April 26 and 27.