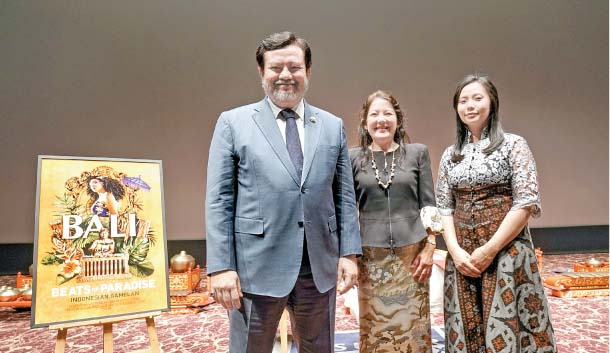 Ambassador of Indonesia to Korea Umar Hadi, left, and Livi Zheng, director of the documentary “Bali: Beats of Paradise,” third from left, at the film’s Korean premiere at Lotte Cinema World Tower in southern Seoul on March 31. [EMBASSY OF INDONESIA IN KOREA]

One of the skills required of a diplomat is storytelling, said Ambassador of Indonesia to Korea Umar Hadi, who recently chose the medium of film to tell a story about his country.

“A film engages many of your senses,” he said. “If you read a book, it piques your imagination, but if you watch a film, you can see, feel and immerse with all that is in the picture and sounds.”

“Bali: Beats of Paradise,” a documentary about a Balinese couple exploring the recreation of traditional gamelan music in fusion with funk and jazz, opened in theaters in Korea Monday. It is available until Sunday in Lotte Cinema’s theaters in Seoul, Incheon and Busan.

Ambassador Hadi is a producer of the film.

“Many Koreans know about Bali and its beautiful beaches and what it means to surf in the water in Bali under the sunshine,” Hadi said. “But after watching this film, they will be curious to see for themselves the dance and the music of Bali when they visit the island.” 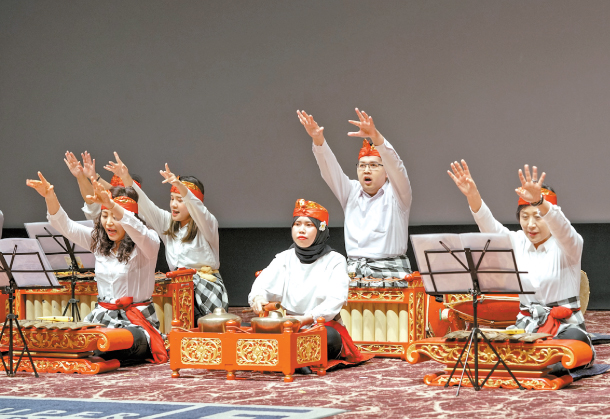 A performance of gamelan music during the premiere of “Bali: Beats of Paradise” at Lotte Cinema World Tower in southern Seoul on March 31. [EMBASSY OF INDONESIA IN KOREA]

Gamelan music, an ensemble of percussion on the pentatonic scale, has been used in films including “Avatar” and “Star Trek.” The Embassy of Indonesia in Korea holds classes on gamelan every Saturday.

The following are edited excerpts from the interview with Ambassador Hadi at his residence in central Seoul on Tuesday and over email with Zheng about the makings of the documentary and their upcoming plans to tell another story - this time, a love story that connects Indonesia and Korea.

Q. It sounds like the film has a story of its own about how it came about.

A. Umar Hadi: When I was serving as the consul general of Indonesia in Los Angeles from 2014 to 2017, I became familiar with the Hollywood industry and thought that it may be interesting to learn how to make a film. That’s when I met Livi, who was then a student studying cinematography. It was also during my posting in Los Angeles that I met a professor of ethnomusicology at UCLA, Nyoman Wenten, as I was trying to learn Balinese dance. So the three of us got together to organize a concert that was about how Balinese music is adaptable to different forms of arts - such as with tap-dancing from Ireland or with jazz music. Following the concert, which was a full-house one at the Aratani Theatre, Livi said, why not develop this idea into a full movie? So that was the beginning. And the story continued to develop as we filmed.

Livi Zheng: Documentaries are very fluid, there is no set script. The story unfolds in front of your eyes with research and through interviews. New gems of information arise and you start to connect the dots. Originally, we did not plan to have Judith Hill and the behind the scenes making of the music video. Judith approached me during the middle of filming “Bali: Beats of Paradise” because she was looking for a Balinese gamelan composer. We met and I quickly introduced her to Wenten. I asked Judith to be part of the film. I knew that Wenten is close to retiring and he wanted a legacy, so we thought a music video would be a good idea. This became the amazing collaboration that brought forth “Queen of the Hill.”

Indonesia is a country of more than 17,000 islands and great diversity in culture. Where does gamelan fit into this diversity?

Hadi: Gamelan is quite well known all over Indonesia because you can find it in the islands of Java and Bali. Java holds around 60 percent of Indonesian population. But as you said, culture in Indonesia is diverse, and diversity in nature and geography is a blessing for Indonesia. We do not consider Indonesia as a melting pot - instead we maintain, promote and celebrate each and every culture that exists in Indonesia. For instance, in my household, I am from West Java and my wife is from West Sumatra. In West Sumatra, people apply the matrilineal system in matters such as inheritance, which means inheritance goes from mother to daughter. I am personally very happy with the situation, as my wife is the person in power in my family (laughs).

What value do you think gamelan can hold for younger Indonesians or for second- or third-generation Indonesians living abroad?

Zheng: Indonesians know gamelan, we grow up with it, and yet, many of us don’t know the small intricacies and details of gamelan. I started living abroad when I was 15. It was from the concert in Los Angeles that I learned so much about gamelan and became very fascinated with it. Through this documentary, I wanted to share my discovery and love for gamelan. Gamelan was sent to outer space by NASA in 1977 and is now being taught in Harvard University, MIT, UC-Berkeley, UCLA and other schools in the United States.

Any plans for filmmaking about Korea?

Zheng: If I were to produce and direct a film, I would like to film a drama. We were inspired after learning about Yang Chil-seong and his love story. Yang Chil-seong is a Korean soldier who was commissioned by the Japanese army to go to Indonesia (when Korea and Indonesia were both invaded by Japan). He changed his name to Komarudin, and during his time there he ended up falling in love with an Indonesian woman. After falling in love and living in Indonesia, he became one of the biggest freedom fighters for Indonesia’s independence during the Dutch war.

Yang Chil-seong fought for a country that was not his homeland and created a deep friendship between Korea and Indonesia that has lasted many decades. I would love to direct a love story between an Indonesian and Korean. Not only does this express our friendship, but also the film itself would be a great collaboration between two countries, filming both Indonesia’s and Korea’s beautiful landscapes and culture.

Hadi: The idea that we have right now is that it will be about two love stories, taking place in two different times. One of them will involve Yang. We have ideas to make the drama edgy and modern. It’ll be something different.

Is Yang a figure well known in Indonesia?

Hadi: Of course. Indonesians respect heroes. We have a hero cemetery, where the Koreans, Japanese, Dutch and more are buried, because when we look at people, we look at the humanity in its basic form. That is why we appreciate the sacrifice that Yang made for Indonesia.