Though he’s still looking for his first PGA Tour win, Korean rookie Im Sung-jae is satisfied with how his first season has gone so far. But ultimately, he wants to be one of the last 30 men left standing for the season-ending tournament later in the summer. 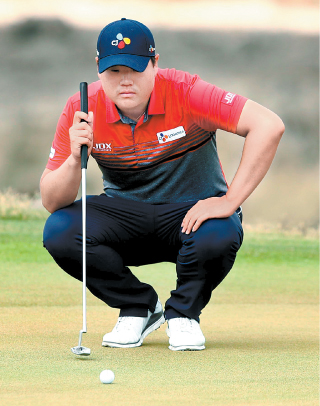 Im Sung-jae lines up a putt during the second round of the Corales Puntacana Resort & Club Championship on March 29. [GETTY IMAGES/YONHAP]

“A victory would be nice,” Im said Tuesday at Harbour Town Golf Links here in Hilton Head Island, South Carolina, site of the RBC Heritage this week. “But my real goal is to qualify for the Tour Championship.”

The Tour Championship, the final event of the 2018-2019 season scheduled for August, will only be open to the top-30 players in the FedEx Cup points standings through the playoffs. Only the best and the most consistent of the tour players will get to be in the exclusive field.

Im, who won the Player of the Year honors and the money title on the second-tier Web.com Tour last year, currently leads all PGA Tour rookies with five top-10 finishes and with a little over $1.8 million in earnings. Im is also tops among freshmen in the FedEx Cup standings at No. 22.

Fellow rookie Cameron Champ has a victory this season but trails Im in all three categories.

Those who qualify for the Tour Championship will also earn a spot in the following year’s Masters. Im watched last week’s Masters on television, but for Im, just getting to Augusta National is not an end in and of itself.

“It’s not so much about playing at the Masters. It’s more important to play well once I get there,” Im said. “It’d be great to play there, but I need to be good enough first.”

Even at the tender age of 21, Im has already gone through multiple pro tours in Korea, Japan and the United States. On the world’s biggest tour, a strong short game is essential to success, Im noted.

“Whether it’s your driving, iron shots, short game or putting, you can’t play here if you’re lacking in just one of them,” Im said. “In particular, short game is directly tied to your survival. You obviously have to drive it long and straight, and you must be able to score even if you miss the green. I need to work on that area.”

Im said he has had trouble saving par from bunkers, and he’s been spending a lot of time working on his shots around the green.

Im said the toughest part of being on the PGA Tour is that he won’t be able to go home to Korea until the end of the season.

“When I was playing on the Japanese tour, I used to complain about not getting to go home, but compared to how things are now, I had it pretty good then,” Im said. “Still, I’d love to be playing on the PGA Tour for a long time.”